Fund the Calabara team with 50 ETH to build uplink.wtf, and 10 ETH to host the first Nouns Raffle.

Twitter + Ethereum is our secret sauce. After experimenting with contests for 6 months, we are now ready to take the project to the next level. We will build uplink.wtf, a unified nounish platform with modules for both a refactored Creator Contest experience and a brand new Nouns Raffle application. 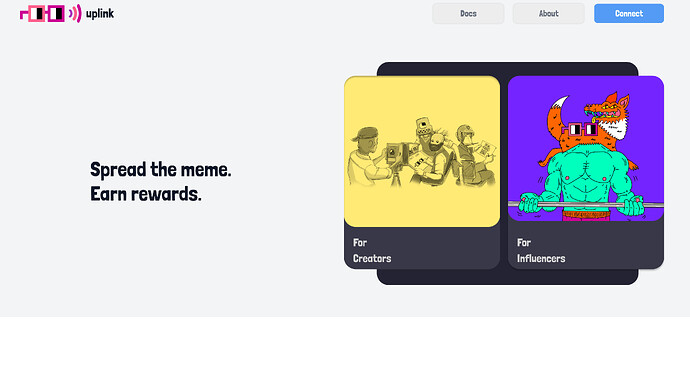 Uplink has two main use cases, each taking a unique approach to planning, content creation, and distribution.

With a proven track record of funding high-quality content initiatives such as the Ordinary Folk video, Nounish productions, and more, NounsDAO boasts a diverse portfolio of content ready for widespread distribution. The challenge now lies in finding innovative ways to expand our reach and connect with a wider audience.

Nouns Raffle is a new mechanism for targeted external distribution. We’re flipping the script on the traditional curation contest model, allowing the DAO to incentivize influential token holders to proliferate nouns in exchange for raffle entrance. Only holders of pre-configured tokens who share specific nounish content on Twitter are eligible for the draw.

NounsDAO puts up 10 ETH to proliferate the Oridinary Folk video. To enter the raffle, entrants must

Once a participant verifies proof of wallet and account ownership, they are officially counted as an entrant. When the contest ends, 1 entrant is randomly selected and the 10 ETH is distributed to their wallet.

The Nouns video contest team is currently posting 25 ETH to create a decentralized marketing team - asking proposers to explain how they will get people to enter the main $200k video contest. Imagine if instead, the organizers created a short explainer video and raffled 10 ETH to a random punk holder that shared it on twitter.

Remember that foobar tweet about getting ETH to market for Nouns? It turns out it’s not such a crazy idea. This model allows NounsDAO to achieve mass proliferation outside of the ecosystem, and creates incentives for influential token holders to extract additional utility out of their NFT’s. Just imagine the memes. 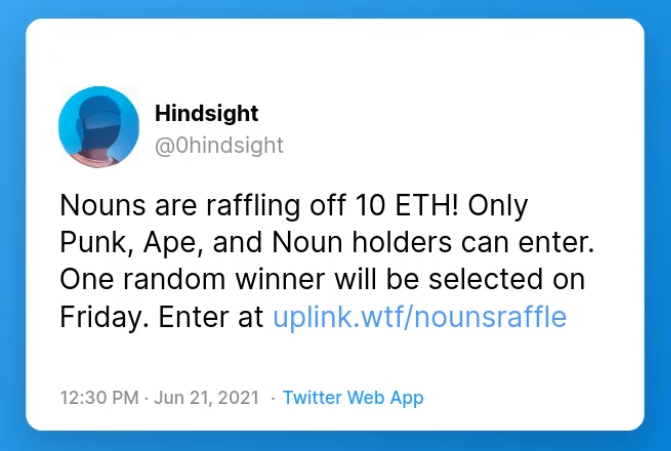 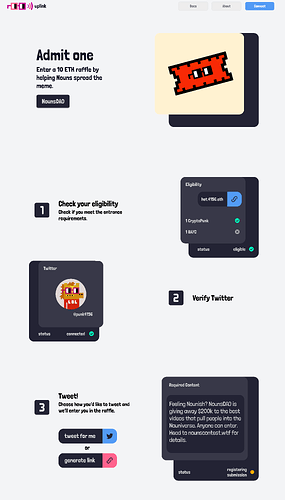 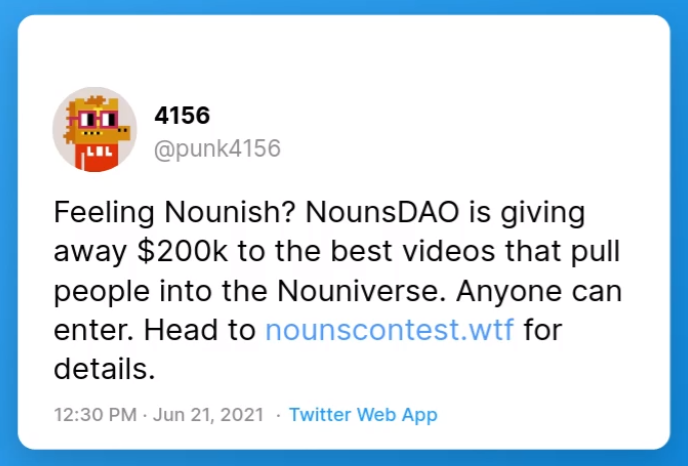 The raffle landing page can also double as a valuable ad space for the Nouns – linking back to nouns.wtf, Prop House, or other relevant projects, with the goal of increasing visibility for other activities of the DAO and encouraging influential token holders to further explore Nouns while they’re here. The raffle landing page is a great opportunity to cross-promote and increase the reach of the DAO’s other projects. If we really wanted to get crazy, we could even render the current auctions.

Of course, we’ll make sure we are complying with Twitters rules and guidelines for paid promotions, as well as taking preventative measures to ensure the system is not gamable / botable.

Twitter contests are an effective means for nounish projects to spread their meme, attract new creatives, and generate novel interest. They can be utilized to align the incentives of a given project and contributors towards driving both creation and distribution. In other words, they are an excellent marketing and proliferation tool. The Noun Square has had great success with this model, so why don’t more projects follow suit?

Twitter contests are an administrative nightmare. The process of fetching submissions, importing them to a judging platform, collecting wallet addresses, and handling payouts can involve up to 3 hours of total admin overhead.

Through Creator Contests, projects can launch open-source marketing campaigns, incentivizing both new and existing community artists, storytellers, and other creatives to proliferate the meme on Twitter.

In this system, community operators launch a contest which triggers an automatic announcment tweet from their twitter account. This tweet serves as an invitation for creatives to craft content and potentially win the ETH or ERC tokens being auctioned following a token-gated community vote. Creatives submit by quote tweeting the announcement tweet with their submission, helping spread the word about the project through their nounish creations.

This UI/UX will be retired in the V2 upgrade


Contests are designed to be completely configurable, with flexible options for rewards, submission and voting requirements, voting strategies, and more - allowing projects to experiment with different incentive systems and implementations that align with their unique goals. Here are some of the ways Twitter contests could be utilized for different projects:

AI pod - onboard new artists and creative thinkers to AI and show off their latest and greatest models.

Composables - recently hosted a contest in which they observed 30+ new collections and 1000+ new traits uploaded to their platform and shared on twitter.

SharkDAO - source and vote on community art pieces to mint as open-editions from the DAO.

For nounish projects and pods, creating and distributing their own meme is critical for the path to sustainability, attracting new creatives, growing the brand, and deploying cool s**t. Creator Contests are the final piece in allowing projects to implement a microcosm of the virtuous cycle. 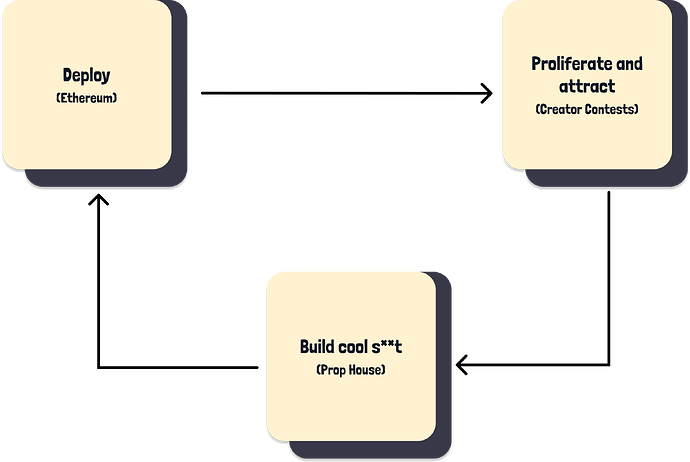 Creator contests exist today. Nouns Raffle does not. We launched creator contests in September, and have since helped groups like TNS, Composables, SharkDAO, and others generate almost 600 submissions and award over 8 ETH + 25k ERC20 tokens to proliferators. SharkDAO and NSFW both awarded us small grants to build the underlying infrastructure. 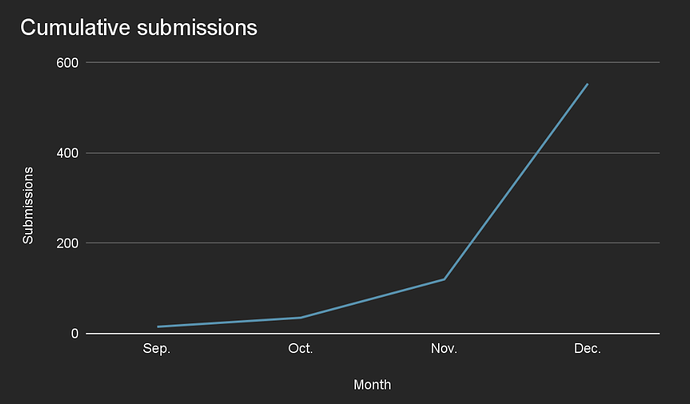 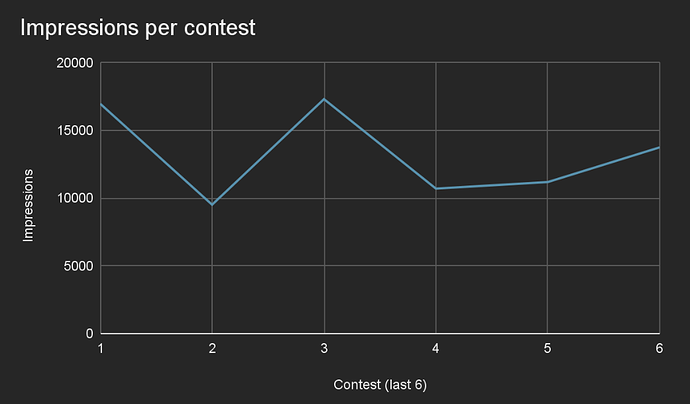 Over the 3 months, we will work in a rapid development cycle that can be split into 3 main phases. As always, everything will be open-source.

In phase 1, we’ll be focused on optimizing and extending our existing stack, deploying Creator Contests v2 to the new platform, and laying the foundation for phase 2.

With most of the heavy lifting taken care of in the first phase, we’ll be able to stand the Nouns Raffle module up fairly quickly. 10 ETH of the budget is allocated to run the first campaign.

Following the deployment of version 1.0 (Creator Contests - week 8), we’ll be targeting the following KPI’s over a 3 month period:

If the experiment is a success, we’ll turn our attention to an on-chain implementation of our Twitter protocol. Our focus will be on determining the feasibility of zk-snarks for generating verifiable proofs for tweet ownership. The ultimate goal of this research is to enable NounsDAO and others to conduct contests and raffles directly on ethereum, initiated by on-chain votes. If we can make this work, Nouns raffle could eventually become a revenue stream for the DAO.

We were both first introduced to Nouns by way of SharkDAO, which we first joined over a year ago. Soon after, we started building Calabara, a platform that hosted various tools to ease some of the unique challenges of a Nounish subDAO. Last Spring, the community funded us with 7 ETH to begin developing Creator Contests. We launched our first contest in September, and have helped fund 60 nounish creatives with 8 ETH and 25k ERC-20 tokens since. We have groups like SharkDAO, Composables, TNS, and others running contests as we speak. With learnings from many iterations, we’re now ready to take the project to the next level.

10 ETH to fund the first Nouns Raffle. These funds will stay in the multisig, and will be distributed directly to the winner.

For those interested in more visuals and info from the soon to be retired Creator Contest application:

A note from the sponsor

I have no links, financial ties or conflicts of interest in relation to this team or proposal. And because of that I intend to vote yes. My involvement was in giving guidance to the team on the product on the marketing tool after they asked for feedback on their original proposal. I am putting this on chain for them because I think it has potential to be an excellent proliferation tool for Nouns, I think it is excellent value at 50 Eth and it demonstrates the positive impact voting no can have on a subsequent proposal in terms of the quality of the proposal. - Hindsight

wanted to share some thoughts on this proposal. Knowing that this has been in the works for quite some time and has been put on chain and defeated a couple weeks ago https://nouns.wtf/vote/188 .

I’m assuming you’re resubmitting this to discourse, because you’re looking to refine it and iterate on received feedback. It would be great if you could add
a) the feedback you received to the top of this thread
b) how you’re addressing it

I see that you’ve iterated from the actual prop, here is my feedback while you’re reworking and re-structuring it:

I personally find it helpful when the following is clearly stated in a prop under respective headlines:

I’d be interested in how the product helps to save resources instead of how much it helps spending. And the saving potential - e.g. x hours saved through automation → enables scalability.

Some feedback on design of the admin UI:

edit forgot to mention: I like what you’re building! thus took the time to respond :))

Thanks Benjamin, great feedback. We’ll work to shape the proposal into a more digestible format like you mentioned.

As for the UI, we mention a nounish redesign but I agree that we should add more context as to what that actually means.

Again, as I said before, this initiative seems to me to be a great solution for a community that is centered around art, whatever one may say.
Nobody canceled the economic component, so such incentives for the community are a necessity.

Edit: lowered our ask and implemented some changes based on received feedback