Noun Sounds will provide a much needed audio-scape to the Nouns ecosystem. SuperTightWoody and Papaya will create a platform and ingest processes where anyone can create, export and contribute CC0 Nounish songs, stems, samples, sounds effects and more.

There is currently no Nouns audio aesthetic, and no environment for it to flourish. There are no sonic logos, sounds or songs that have a consistent use case in the Nouns world. Nounish creators of apps, videos, games and beyond have nowhere to turn for audio.

Nounish creators have to source their own audio, often out of their own pocket while being forced to manage limited use rights.

All of this makes brand consistency/recognition difficult and next to impossible. Sonic logos, sounds or songs are a core part of any brand.

We will create a robust website that will act as a hub for all things related to Nouns audio. This will include an easy to use music “PLAYground” to build a unique Nouns song for your project, a repository of samples/sounds/songs and a robust roadmap with processes and structure, allowing our environment to grow. 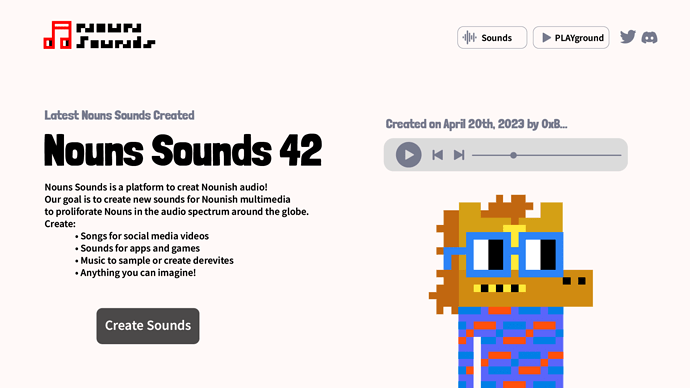 On the homepage, the latest Noun Sound will be displayed along with the Noun it generates! This, and all Noun Sounds, will be available for free use and CC0.

How does it generate this Noun Sound you might ask? Let’s head over to the… 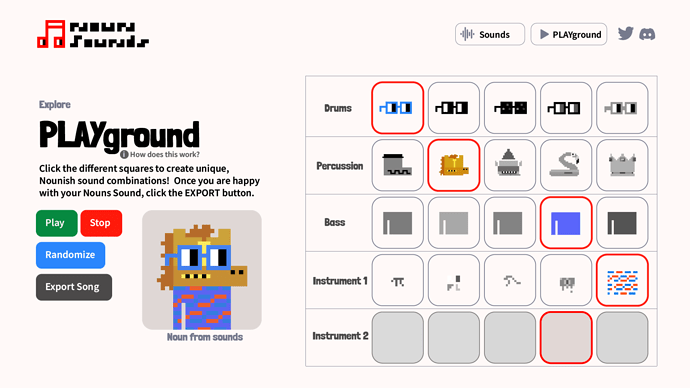 The visual Noun will be generated via the PLAYground tab.

In this area, a song is split into its different tracks. Here, one of the 10 songs created for Nouns will be selected. Each song will contain 5 variations per instrument. Each instrument will correspond to a Nouns layer whose assets will be randomly generated when the page loads.

Refreshing the page or hitting the “Randomize” button will randomly select a new SONG and new set of LAYERS. Every time you create a new Nouns Sound, a unique new Noun will be born to accompany it!

Put together your favorite song tracks for your project and…VOILA! You now have your own unique Noun Sound. 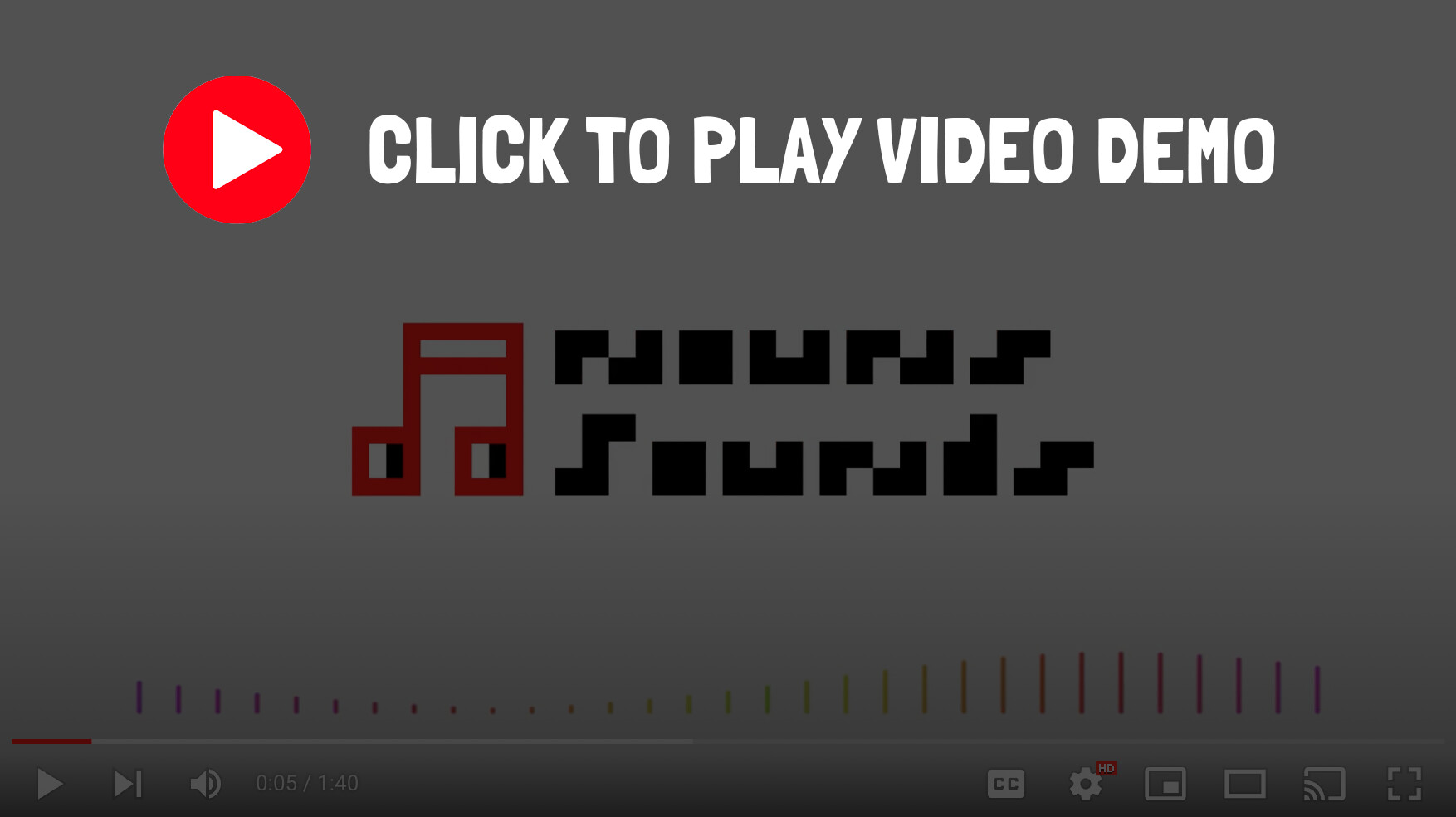 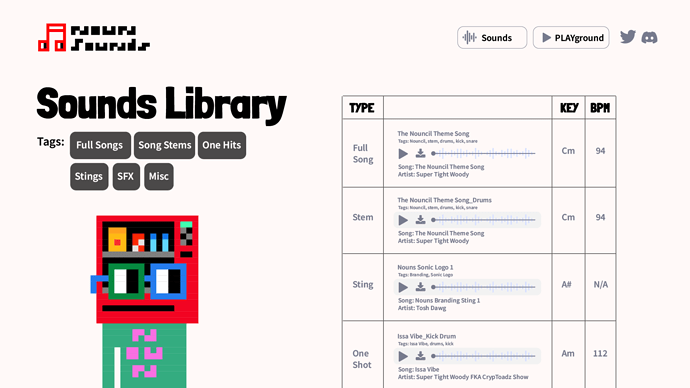 If you want to grab any of the full songs, stems, loops, samples or sound effects by themselves- this is the place to go. Easily filter these via metadata and get to creating your Nounish multimedia!

How Does This Proliferate Nouns?

Sound is the backbone of any cohesive brand and multimedia creation. This CC0 resource will assist in the production of music, apps, games, videos, social content, sonic branding and more- all revolving around Nouns. As we work along side Nouns DAO in the future, a self sustaining library of high quality audio will fill a void for creators across all mediums of creative content.

With 20+ years of music production and engineering experience, SuperTightWoody is a Grammy Nominated music producer. Having works featured on major label albums, TV shows, movie trailers and television commercials. In the Nouns space, he has created the theme song for the Nouncil along with theme songs for The Noun Square Twitter spaces (and the “soundboard” for TNS). As a Nouncil and TNS member- he is very much looking forward to expanding his contributions into the Nouns space.

Papaya is a software engineer with 15+ years of experience known for his attention to detail. He has worked on numerous NFT Collections, tools and Defi protocols. He loves building unique experiences for web3 communities and developers.

The creation of everything laid out in this first proposal will take 3 months to complete from proposal approval.

72ETH for deliverables + timeline.
Signers will be SuperTightWoody and Papaya for multisig wallet 0xE8cF782Bb4aCB9000fae76bA940295CA988DE7Be

Our first proposal is to create the first Nounish audio library, a website, an easy-to-use tool for builders to create songs, and laying out the workflows for onboarding new music makers into the system processes.

Next Proposal: New Tools + Bring on other musicians

Once this infrastructure has been built and our ingestion flow for new audio is set, it’s time to grow independently. 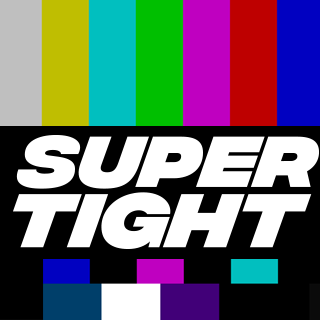 WOW!! I have been wishing for sounds for several projects! And yes, it’s outside of most project budgets. My brain is booming almost as much as when I first discovered NounsDAO. Having worked with and without Woody on The Noun Square, I have a serious understanding of how much it connects us to the content of the show. It is not the same without Woody, and tools like this so he could sleep would be amazing. LOL Love you baby, Lord Wood! LFG!!

This looks really awesome, thank you for making such a thoughtful proposal.

The thing I am curious about is how this compares to past nounish sound proposals / related (e.g. Nouns DAO). Is there anyone around to speak to why that didn’t go through and if this may be facing some of the same difficulties?

First of all, this looks amazing Woody!

I think @joshuafisher might have some insight on this. He worked on Noun Tracks proposal with another artist really early on.

Noun Tracks - Unlocking the Sounds of Nouns Authors: Arpeggi Labs, Nate Fox & Joshua Fisher. TL;DR Noun Tracks are the fully on-chain 1:1 CC0 theme songs of a Noun created using Arpeggi Labs’ on-chain DAW with samples and patterns performed and written by Nate Fox. Together we will develop and launch Noun Tracks. These NFT’s are claimable for Nouners plus all the tools will be public and sounds will be compeletely CC0 for the community to enjoy. How? Part 1 - The Noun Track Stack Nouns…

I support this–thoughtful, well put together, and fun.

Thanks so much Honk

Joshua Fisher had presented something similar but using an on-chain music sequencer and really focused in on the music/song aspects of audio.

Noun Sounds will be songs as well but we want to also put a lens to the other audio components like sound fx for apps/games, sonic logos for Nouns etc.

Appreciate you taking the time!

Amazing proposal! I think it also can be used with different sounds for example voices. Once all ui and backend is build there will be so many opportunities to explore sounds.

this is so good and I can see multiple use cases for this work especially as we build out animation, toys and games

Love this well thought out and demonstrative proposal. We’ve already seen through The Nouns Square Noun-o-Clock show how sound effects and music can help to proliferate the meme. Some of the sounds have become directly connected to nounishness and are being used on other spaces, broadcasts. This is such a fun, interactive way to continue to produce new creations collaboratively and to have cc0 sounds and music that can be used by anyone on multiple platforms (especially important as more is done via YouTube and TikTok).

(and I might be a bit biased due to Eres mi Flamingo – it’s a masterpiece! lol)

Eversince i joined the Nouns eco system, sound has always been the passion project that i have always wanted to do. I am so happy to see the best Sound guy in the Nouniverse bring this to the table.

Would very much love for this to pass and we can get building especially the @nounsoundsDAO - Funding musicians to make Noun Souns and also looking at how we can build a Nounish record label!

All the best woody on this… please let me know when i can come on and get you more music from Africa for this!

I enjoy the music you make!
Especially this music ! Stream Noun 392 - A Shrimpy Noun in a Burger (SuperTightWoody POAP) by SuperTightWoody's NOC POAPs! | Listen online for free on SoundCloud

awesome proposal – if you need a third for some help, i would love to contribute – i have written and produced for a few different web3 projects and am philosophically aligned with nouns mission and thus interested to contribute to music-related proposals.

Love to see Music/Sound NFTs combined with Nouns. Very innovative how the sound is connected to each of the characteristics.

Id also reccomend working with Arpeggi.io on it. They’ve created a protocol to store and track the lineage of samples/stems as NFTs. That could create a great remixing / collaboration culture for the CCO sound NFTs.

Beatfoundry also made a post in the discourse and they could be very value add in generative sounds. They’re the leading generative music nft platform.

I’ve worked with Latasha in the past and would love to reach out to all web3 musicians that would be down to collab.

Arpeggi is very cool- love it! I think for Noun Sounds it could be used to produce music, but it has it’s limitations for a scalable ecosystem. What we are trying to build is a safe and nourishing way to onboard musicians into that program all while providing creators the audio tools they need to enhance any multimedia they might be working on

Thanks for the feedback and ideas!

I’m ready for the Sounds. When do the beets start dropping?

So excited to kick this off! We have a 3 month deliverable but I’d imagine I will be sharing tunes throughout the process

Setting up the Discord right now!

One question, do Nouns talk? What do their voices sound like? Will you provide voice assets or guidelines on how developers should behave when giving Nouns a voice?

Hey- thanks for the support! I don’t think we will be defining how Nouns talk, as I’m sure there will be many different interpretations of this! That is more for the community to organically develop. We will be focused on delivering music, sound effects, loops, brand stings and more + building a community around Nouns via music.