The cost is not just for the stickers

Yup, high quality stickers are not the cheapest and Nouns branding product should be of certain quality.
Am just extending help to a fellow Singaporean builder, to share resources as there are supplier that produce decent quality stickers at a lower price point; to help bring her cost down which could in turn help in the success of her prop.

If its not required, its all good. Just happy to see more Singaporean Nouns builder

Yup, I was only looking at the sticker cost, an area where I can share resources and help.
Apology if I understood wrongly, USD503 were spent on stickers alone, no?

It doesn’t take any money to start a Twitter, to tweet, or to host a space–it does take time and I understand that.

When The Noun Square first started, they all did it for free and proved a need/want in the space before they looked to the DAO for funding. I don’t want to discourage you, but encourage you to start Twitter, start the spaces, do the events and grow that community.

Show the DAO the need.

We got our stickers!!! (It was 100% self-funded by myself, as mentioned on threads above.) 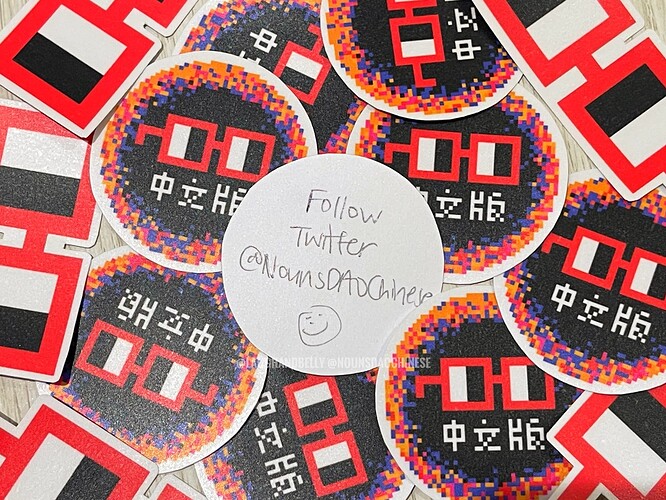 We are heading to APEHOUSE Singapore at Mandala Club at 6pm GMT+8.

I’m dressed up as a Slytherin student for the Halloween Costume Contest. 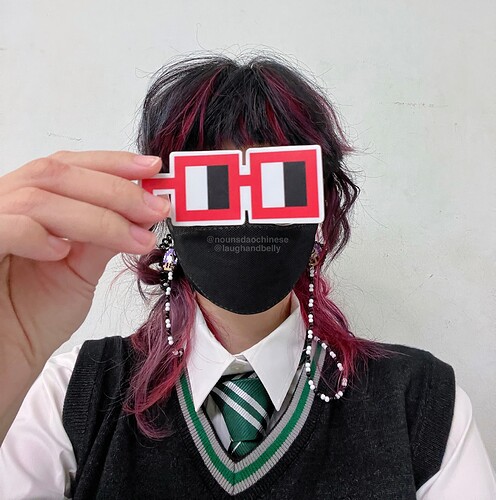 Here are all the NounsDAOChinese supporters we have curated and look at how perfect the photographs look together! 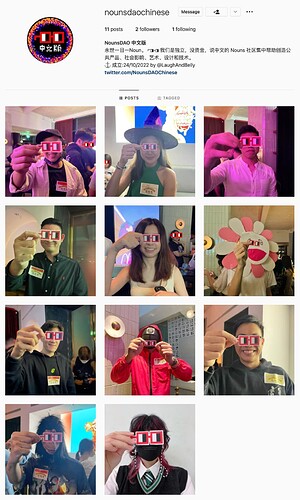 I’m eternally grateful for the looooove and warm welcome from BAYC Singapore! Much love to Jaye Funk and his entire team. Really compassionate and passionate people.

I got to meet @LaughAndBelly last night at the Apehouse event. She’s successfully made another convert to the Nouns ecosystem. I’m here and will spend the next few weeks reading and learning more!

One of the things I observed and appreciate about @LaughAndBelly was that she seems an introverted person by nature, but there she was at this event showing up, making a huge effort approaching as many new people as she could, introducing herself and sharing stickers and her experience in the Nouns community. Really admire and respect that initiative and drive a lot.

So glad we got to meet, @LaughAndBelly! cheering for your success and excited to see what you get up to in this community next

Great job with this @LaughAndBelly

Great use of the stickers! Very clever. Looks like you got a connection to NSFW. This would also be a great one to apply for a prop house in the future if you have problems getting retro funding for some reason.

Hello Andrew! Thanks! I love maximizing with the limited resources I have. Please let me know how I can get retro funding because no one is granting me it at the moment. Thank you!

NSFW is the only way I know of at the moment. Keep watch for the next Prop House round here and let me know if you want some help putting it together. I’m not sure why the next round hasn’t opened yet, but hopefully it will after the hackathons are complete.

Cool! No problem at all~ I have kept a lookout on Prop House and have submitted Prop 1930. Have a look here: https://prop.house/nouns/challenge:-make-nouns-go-viral/1930 Thank you!

Awesome! That’s perfect. If you don’t make it on that one, keep refining and submitting. It looks like it’s just a matter of time for you all.

UPCOMING EVENTS I WILL BE HEADING TO PROLIFERATE NOUNS IN PERSON:

I have been invited by 2 friends from the space to attend a networking event called Salad Tuesdays.

WHAT I WILL BE DOING
I will be connecting with other like-minded individuals who are in the NFT space or are keen to know more about NFTs.

WHAT I WILL GIVE TO THEM
I will be passing them stickers of the Original Red Noggle and the NounsDAOChinese logo. (This is 100% self-funded by myself.) 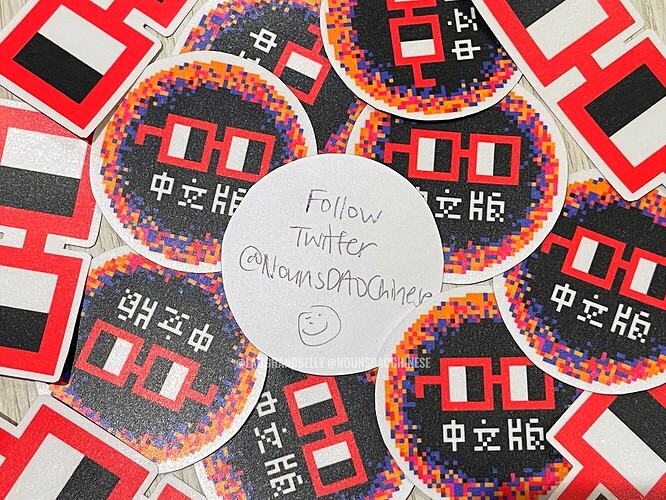 I will also be passing them this NounsDAOChinese Hand Fan, which is super practical, considering how hot and humid Singapore’s weather is. (This is also 100% self-funded by myself.)

@LaughAndBelly reminds me a lot of @Aubtoshi in her can do attitude and positive energy. I think that she would be a pretty excellent NOUNish ambassador for the Chinese community

I think the best thing to do for this is a Prophouse Round. As soon as a new round is up like @AndrewLaddusaw Mentioned. Great work @LaughAndBelly, we over at Nouns DAO Africa are very much open to massive collaboration with Nouns DAO Chinese. I think NSFW is closed for a while!

Everything went pretty well! We met tons of new people personally and introduced them to NounsDAOChinese. 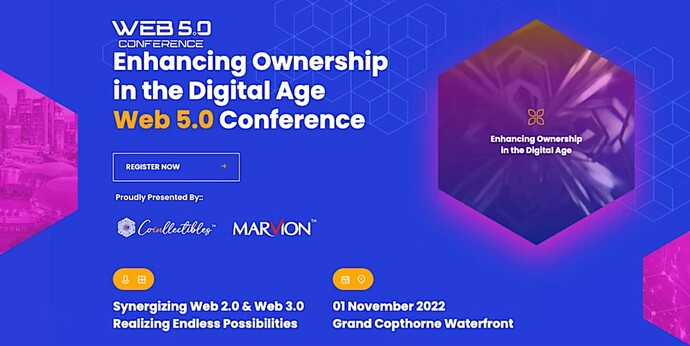 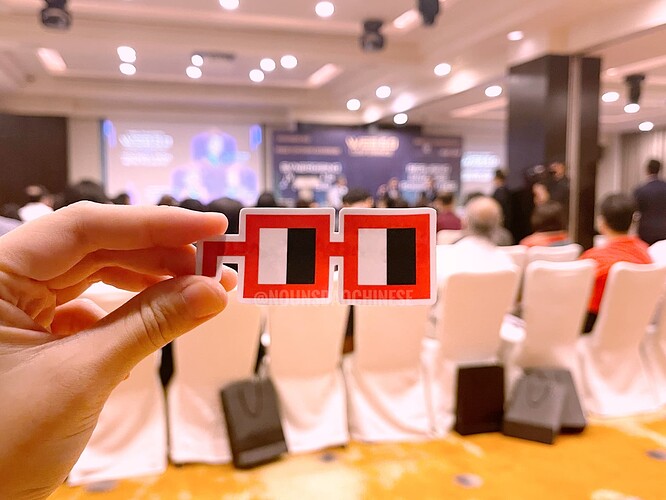 We met content-making expert, Jamie, who is new to the Web3 space, so we introduced her to the Ethereum blockchain and NounsDAO governance. 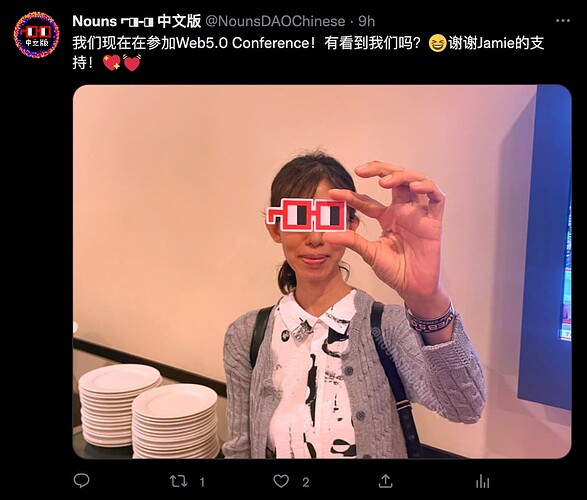 This is a noun pilled Joseph, the founder of Red Door Digital, a digital gaming studio. (And hey he got a Solana Hackerhouse t-shirt!!! 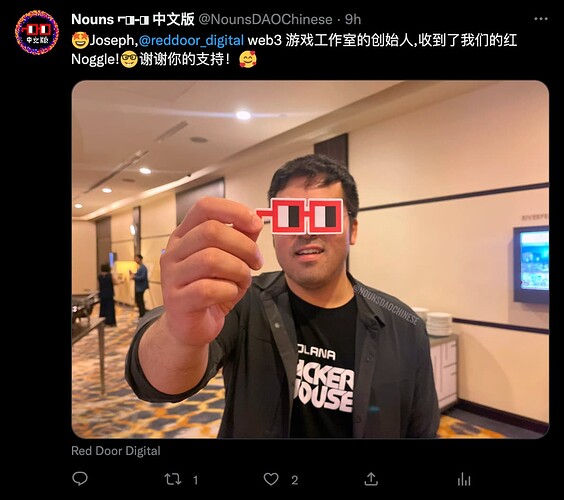 Helena, a property agent, is also new to the Web3 space but wants to create her own blockchain from scratch. So, we noun pilled her.

WHEN I WAS TRAVELLING TO SALAD TUESDAYS:

Encircle is a video producer whom I met privately for some stuff, but I noun pilled him while walking to the train station and when we took the train together. 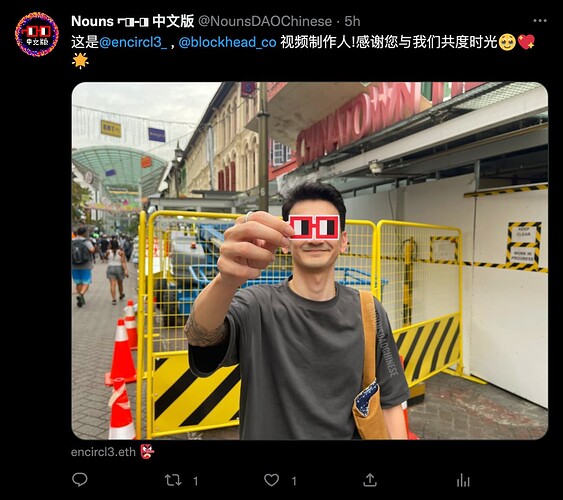 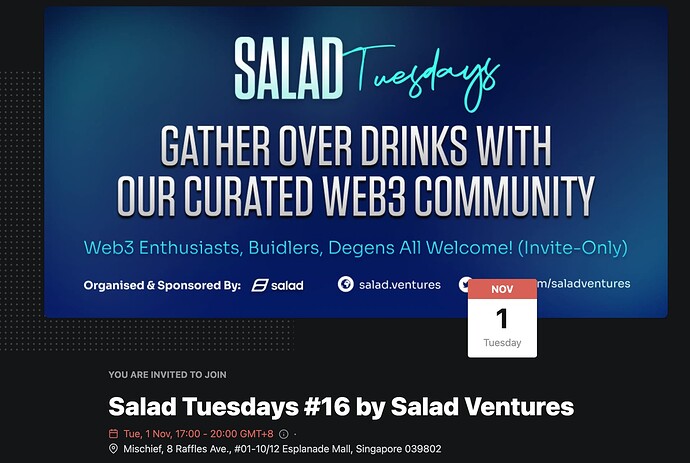 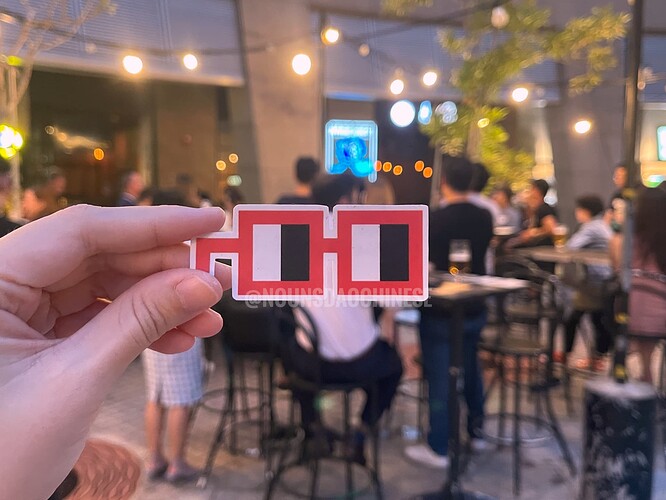 Francis, a business developer at Ethlas, and secret artist 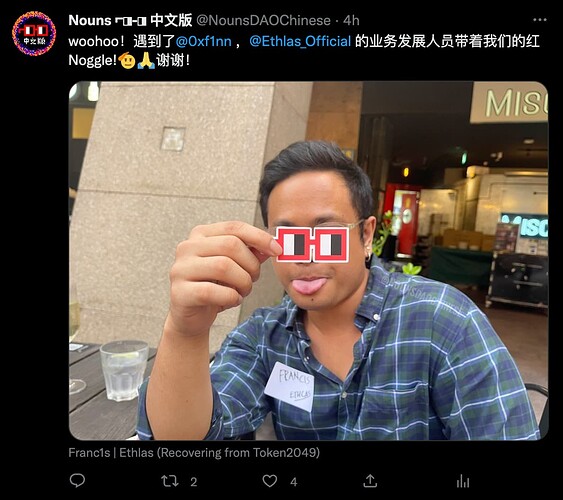 when posing with our red Noggles, I guess it is his signature pose since he does it on all the photographs he took at the event. Hahahaha. 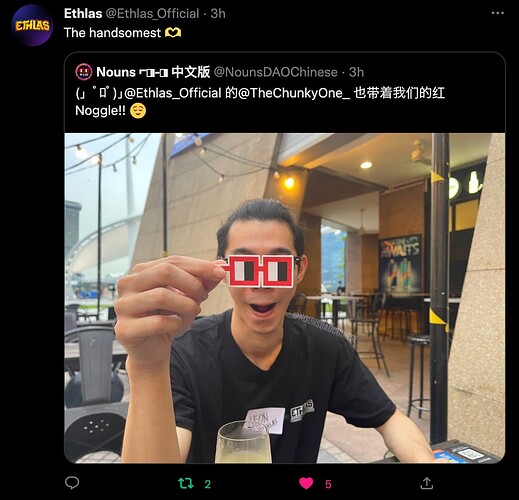 The founder of Qtopia also supported our Nounish photography gig~ 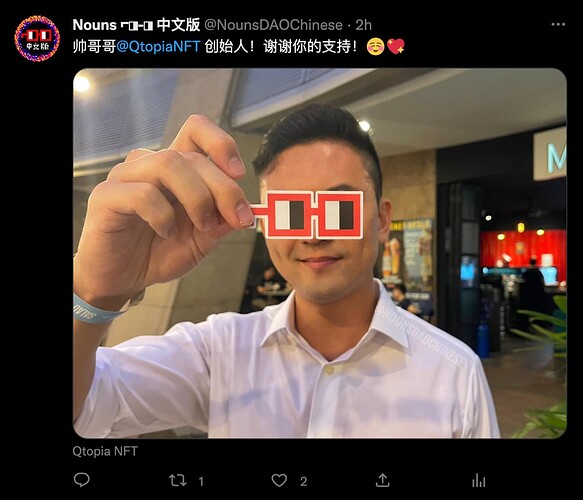 Elysa, a visitor at Salad Ventures, was really new to Web3, so I introduced her to NFTs and NounsDAO Governance, and she told me this is the first time anyone has given her stickers so it is going onto her laptop. 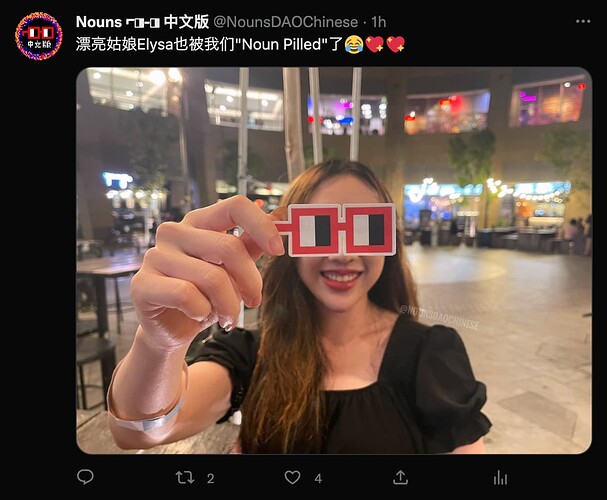 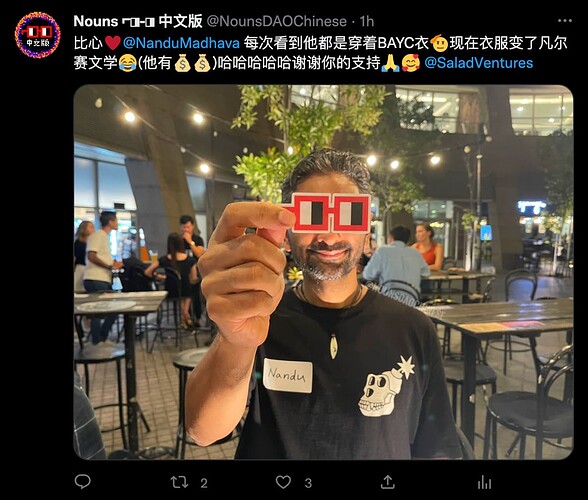 It has been so fun meeting people that are keen to know more about the Web3 space and people who are already in the space! I can’t wait to do this again!

We created a Discord channel for NounsDAOChinese. Here is the Discord invite link. 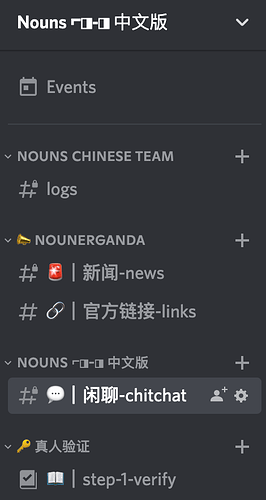 Thank you for reading our Discourse and supporting NounsDAOChinese.

We have created a Prop House proposal to make NounsDAOChinese go viral. Please vote for us when voting opens!

We’ll be heading to EVEN MORE physical events to noun pill EVEN MORE people.

Here are the physical events we will be heading to:

WHAT I WILL BE DOING
I will be connecting with other like-minded individuals who are in the NFT space or are keen to know more about NFTs.

WHAT I WILL GIVE TO THEM
I will be passing them stickers of the Original Red Noggle and the NounsDAOChinese logo. (This is 100% self-funded by myself.)

I will also be passing them this NounsDAOChinese Hand Fan, which is super practical, considering how hot and humid Singapore’s weather is. (This is also 100% self-funded by myself.)

Will be heading to even more events today!