We’re aiming to bring Nouns to life like never before by animating all Nouns assets as public goods and creating tools for users to access these animations quickly and easily for use in any project. There’s 11 unique and thoughtfully crafted animations to choose from with plans to add more in the future.

For those that don’t know me, my name’s Jeff [insert 22 Jump Street meme here] and I’ve been developing an app over the past year that aims to engage NFT collectors by bringing their NFTs to life.

The concept was inspired by the popular Japanese game ‘Tamagotchi’ released in the late 90’s. Each handheld device contains a virtual friend the user must tend to in order to keep it alive, happy, and healthy. Interestingly enough, it’s a style of game that you don’t necessarily ‘beat’ or ‘win’. It’s more of an experience of having a buddy that you can play with, care for, and watch grow throughout it’s lifespan, forever.

I thought it’d be fun if people could do the same with their NFTs, so I decided to build a prototype. At first it started out as just a silly napkin sketch, but now we’re proud to say we’ve recently finished adding support for all 6,969 CrypToadz, each with 11 unique animations totaling over 75,000 files! (That’s 7.6 GB of raw toad data). For those who own a CrypToad, you can check out the app here.

What we’re aiming to do is leverage the tech we’ve developed for CrypToadz and adapt it to build tools to generate & access Nounish animations for anyone to use. Ultimately, the goal is to empower people to actively use Nouns in fun and engaging ways to help spread the meme.

To do this, we’ll create an easy-to-use Noun Builder app through which anyone can animate and export unique and thoughtfully crafted animations for any Noun as public goods for use in any project. This includes all current Nouns, future Nouns, or any custom user made Noun you can imagine by mixing and matching traits at will or at random. There are 11 total animations to choose from, with plans to expand to more in the future.

Not only that, but any animation for any Noun configuration can be easily accessible via a back-end API for developers to use in their web apps instantly and seamlessly.

As an added bonus, anyone can immediately interact and play with their Noun or custom Noun through the interactive app we’ve already built.

The 11 total actions and states are: idle (breathing/blinking), happy/loved, eating pizza, playing a gameboy, sad/crying, drinking coffee, tired, sick, eating a mysterious object like a mushroom (adapted from toadz but can easily reskinned to another food item), sleeping, and drinking a health potion. In total, we’d generate over 10,000 unique files to bring this vision to life.

We generated the following animations for Lil Nouns for fun as a test, but the same concept applies for Nouns. Each will have the option to toggle the Cool or Warm background, or none (transparent).

Mushroom (can be reskinned to another object)

Users can interact with their Nouns in several ways:

How is this valuable to Nouns??

Everyone from experienced devs to everyday users will be able to generate & access Nounish animations on demand, either through the API or the front-end tool within a few clicks.

Enthusiasts, developers, and/or content creators can save countless hours by bootstrapping these animations to be used any way they like! They can be used in many ways, such as:

This sounds like a very fun idea, I love the animations. Would you be willing to make the data accessible to other developers via a public API? Maybe with something like a license that requires attribution? It could be interesting to have Nounish characters hanging out on the various projects’ sites; imagine Timpers’ disco floor but with TinyCitizen characters rendered in real time.

Through the interactive app we’ve already built, it provides opportunities for users to earn rewards through quests.

As an example, we’ve successfully rewarded 75+ unique CrypToadz players with a CrypToadz hat and pair of Nouns glasses to those who reached level 10 with a CrypToad through the interactive app. Everyone shared how much they loved this event!

This provides a more rewarding experience because the merch drop felt earned rather than simply given. In turn, it promotes camaraderie and a sense of fellowship among the community who want to achieve a mutual desired result by partaking in shared experiences.

Any Nounish DAO that wishes to engage their audience can task their community with completing certain actions through the app and granting them an award upon completion. 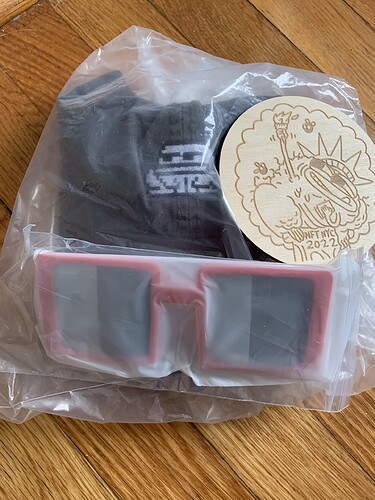 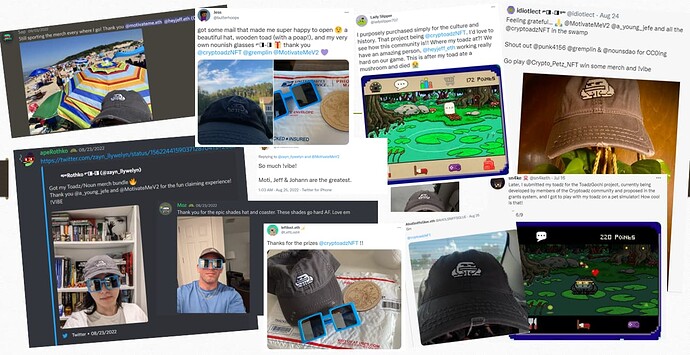 pssst… This event is still ongoing! If you want a CrypToadz hat and Nouns glasses you can still grind for one! Ping me

If we make these assets readily available for people to access in a fun, engaging, and easy way, it could open up doors for new people to enter the ecosystem.

Those that have new, interesting, or great ideas to build on Nouns to help proliferate the meme but have no developer or animation experience can often feel discouraged not knowing where to start.

With the in-app builder, we can inspire existing Nounish community members as well as potential new ones to create something Nounish easily and quickly. Anyone can get up and running with tens, hundreds, or thousands of animations ready to use within minutes.

I’m an engineer, problem-solver, and purveyor of ideas that I believe are worth telling. I originally come from a mechanical engineering background, having worked with agencies like NASA and Boeing on mission-critical spaceflight hardware. From a young age, I was always obsessed with tinkering and bringing my creative ideas to life.

I became Noun-pilled late this summer through some people I’ve met within the CrypToadz community. Since then, most of the free time I have is spent in Nounish discords meeting cool new people, discussing ideas, and learning as much as I can about all things Nouns!

Some of my credentials include:

"Hi! I’m Pixelfowl, also known as Johannfowl. I’m a Brazilian pixel artist and animator that loves coffee, power metal and writing short stories. I used to be a freelance copywriter, but I always loved art and indie games. So, in the first opportunity I had, I tried pixel art — that hooked me instantly.

During this past year I had the amazing opportunity of working with Jeff and it really changed the game for me. After learning a lot, creating hundreds of animations and writing thousands of lines of code, we’re making things that we thought were impossible, and now we’re going even further!"

74E for Deliverables within Timeline

Current Success Metrics (as of Oct '22)
As for our interactive app, CrypToadz holders seem to really enjoy it. Here’s a few metrics that show it’s stickiness. Note that little to no capital/time has been spent on marketing, advertising, or outreach up to this point.

A lot of people have mentioned how much they loved their toad animations and seeing them in action, some even buying their first toad because of the interactive app. I think it’d be fun to provide this same experience for the Nouns community.

“This sounds like a very fun idea, I love the animations.”
-devcarrot, Nounder

“I love my animated toad! Diggin the game. It’s bringing my back to my Tamagotchi days.”
-Adam Fern, Founding team @ CashApp, Head of Product @ Square (Loans)

“Excited for lore and Toadzgotchi as well”
-Gremplin, pixel placer extraordinaire, artist for CrypToadz and Nouns

“Omg the Toadzgotchi proposal is cool. My wife who isn’t into crypto much that was one of the first things she asked me about NFTs ‘so do you have to like feed your toad and stuff or what?’”
-Toadyhawk.⌐◨-◨, Nouns delegate and The Nouns Square Founder

Toadzgotchi was the initial name of our app circa 2021 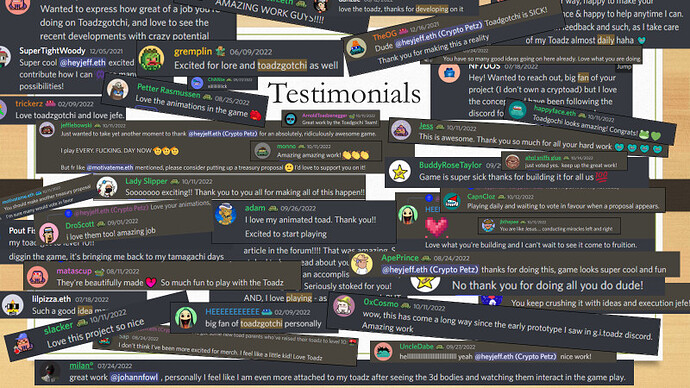 In the future, we’d like to add more animations, plus explore the idea of letting anyone upload their own animations to the builder with a review style process. This way, we can accrue an expansive database of assets to be used by all as the potential go-to solution for Nounish animations.

I sincerely appreciate everyone who spent time reading this! I am excited and eager to help build the future of Nouns together and can’t wait to see what everyone does with the assets!

Sounds delicious. Animation = proliferation. I hope we can animate FOODNOUNS with your app one day in the future.

“Any Nounish DAO that wishes to engage their audience can task their community with completing certain actions through the app and granting them an award upon completion.”…gamified merch and experiences is also a great idea and all communities could benefit from an interactive app like that.

I love it! Adorable, open, and easy to use!

thank you Tracy! We’ve got some amazing stuff planned for the future - stay tuned

Yes that’s the goal - to build an expansive hub of all Nounish animations! Including subDAOs!