Social voting is inarguably one of the main problems affecting Nouns DAO. It compromises efficient use of the Treasury in proliferating the ⌐◨-◨ meme.

Nouners many times aren’t necessarily voting for what they believe is best. Instead, they feel trapped into quid pro quo voting, afraid that their vote could reflect poorly on their image, and/or affect the likelihood of getting their own prop through when the time comes. Conversely, it occurs that Nouners vote in favor or against a proposal based on how the proposer voted for their past props.

This dynamic is irrefutably not in the best interest of the DAO.

Evidence of this is that 85% (147/173) of on-chain props that have made it to either the Passed or Defeated state have passed. The great majority of those that passed didn’t require going back to the drawing board to optimize things like distribution, value back to the DAO, and price. Some argue that props that have support are the ones that make it on-chain, but reality is that in most cases the real discussion starts when it’s submitted on-chain.

I propose the DAO initiates R&D towards being the first to employ zK-SNARKs to attain Private Voting. Private Voting would allow Nouners or delegates to vote, the vote would be tallied trustlessly on-chain, but it would be impossible to determine if the Noun voted ‘yes’ or ‘no’. Even after the vote concluded.

I am passionate about this issue for two reasons:

I propose starting with a NSFW round to get some proof of concepts running. Then evolve to an on-chain prop to develop the full implementation.

I’m known as DigitalOil. I’ve been in the crypto space since 2014. This tweet pretty much reflects my evolution: 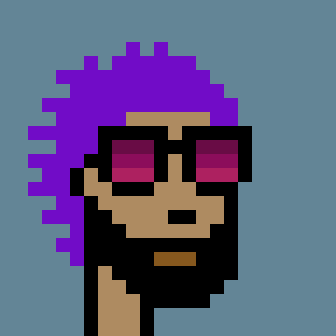 Unfortunately, although I heard of Nouns near its genesis, I didn’t pay too much attention to it. In June 2022 I bumped into Nouns again and to get my feet wet I bought some LilNouns. It wasn’t until later this year that I started thinking about DAOs more deeply and was reminded of Nouns.

This time, I did a deep-dive and this is what came out:

@0xDigitalOil
A template for the future of decentralized governance was deployed over 513 days ago and most of us didn't notice. Read below for a meat-packed 🧵 that will feed your decentralized soul and restore your faith in what's being built. Here's how @nounsdao works under the hood... https://t.co/2ZQlH0Gt5Y 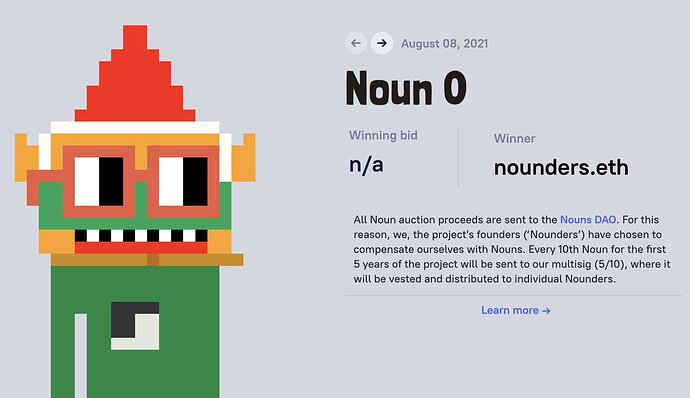 Then, I bought a couple Nouns. And then I deep-dove into subDAOs (LilNouns mechanics):

@0xDigitalOil
11 days ago I tweeted about the nuts and bolts of @nounsdao. Today, it's @lilnounsdao turn. LilNouns DAO was born as a lower-barrier-entry to Nouns DAO, but has become a vibrant community in and of itself. Hope you enjoy this 🧵 where I deep-dive into how LilNouns DAO works. https://t.co/IOJD4ULGt4 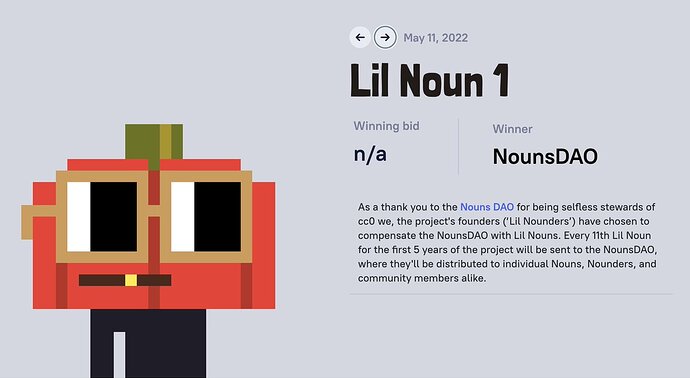 And I did an analysis of Nouns Prop history here:

@0xDigitalOil
Walk with me as I take you on a stroll through the history of the @nounsdao Treasury. We'll dive into income, expenses, book value + I'll highlight the most interesting props thru the DAO's 1+ year history. If u've ever wondered what DAO does with its funds, u'll enjoy this 🧵

I recently submitted a prop that uses Chainlink VRF randomness to distribute some of the Nouns Vision Glasses in the Nouns Treasury.

And now, I’d like to focus on Private Voting.

Zero-knowledge proofs have been around since the 1980s, but it wasn’t until the early 2010s that zK-SNARKs were invented, as until that time there was a way to construct proofs but they required multiple interactions between prover and verifier which is impractical for most applications.

SNARKs are non-interactive and succint by definition; so a perfect fit for blockchains. SNARKs enabled the first cryptocurrency application of zero knowledge proofs with Zcash, a blockchain that allows for P2P private payments.

This is roughly the way zK-SNARKs would work for voting in a DAO on Ethereum:

Some of the difficulties are:

My early research has led to some preliminary approaches in solving the problem at hand. These are the approaches and trade-offs. 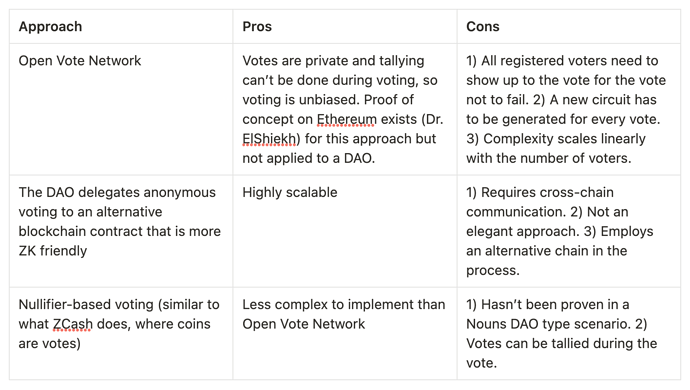 I am requesting 12 ETH per month for 3 months, paid monthly to get some proof of concepts working. An additional 1 ETH to cover infrastructure and gas expenses.

Weeks 4-5: Proposing plan of how proof of concept will work

Weeks 6-10: Implementation of proof of concept on testnet

Weeks 11-12: Report of design and proof of concept results and plan for on-chain prop

Although this is not an easy problem to solve as its highly unexplored territory, my hope is that we can check off as many of these objectives during this 3 month part-time residency:

I am excited to be working at the intersection of two of my great passions – applied math and Nouns.

My hope is that we are able to achieve Private Voting for the DAO and for Nouns to be the first to make this huge leap for web3.

This proposal looks fantastic I am excited to see it come to fruition.
I appreciate your dedication and effort in putting it together. This is a great thing to focus on

Excited about this. It feels to me like the best quick and dirty solution is to rely on another blockchain (i.e. approach #2). Are there working examples of this? The cons you lay out don’t seem super significant to me.

This is really cool, I’m enjoying learning about this side of the dao.

I am a ZK researcher and co-founder of Poseidon ZKP (https://twitter.com/Poseidon_ZK). I am also an nouns owner (that is for my anonymous identity so I won’t disclose which one I own in public

) and big fan of Nouns DAO. I published one of the first ZKML paper and the technique was adopted by worldcoin.

Poseidon ZKP is a on-going project that is partially funded by 0xPARC and works closely with Privacy Scaling and Exploration group of Ethereum Foundation. Poseidon ZKP implementes a set of highly optimized ZK circuit as primitives so that application developers can use Poseidon ZKP as black box API and SDK to build zkDApp purely using Solidity. zkVote is one of these primitives.

The core idea is anonymous membership proof + external nullifiers. All the member who are eligible to vote can join an anonymous group. Then, a valid vote requires verify two things in ZK:

Currently, Poseidon ZKP contracts has built circuits and unit tests for both, as well as a demo zkDApp (more details later).

In addition to the circuits, a fee relayer is needed (otherwise gas fee payment would leak voter’s identity), Poseidon ZKP also built a fee relayer prototype based on open-zeppelin defender to handle that.

Poseidon ZKP is designed to be modular, so it supports using NFT as anonymous group credentials from the beginning. In the future, more advanced features such as hybrid voting can be added (voter can choose to be anonymous or not).

TLDR, the protype and zk voting demo is end to end work. We can make this to production in Q2 (with top tier ZKP code audit and trusted setup). I think we have already checked every boxes that @0xDigitalOil in success metrics

Get proof of concept implementation up on Goerli allowing token holders to vote on a proposal without revealing if they voted yes or no. Note: it will be known who voted and who didn’t.
Setting conditions up such that not every token holder is required to vote.
Not requiring excessive preparation ceremonies for each vote.
Ensuring that the proof is small enough to fit into an Ethereum block.
Making it scalable to be able to handle more voters.
Minimizing (target keeping at zero) any trust or relying on admins.
Making it dispute-free (such that the implementation doesn’t depend on an external entity having to dispute an incorrect proof interrupting voting).
Not requiring depositing collateral from an admin or voters.

Note: It is deployed on Optimism Goerli and generates ZKP inside MetaMask (using MetaMask SNAP) thus require download MetaMask Flask. We could put the ZKP generation on the DApp as well.

We would love to collaborate! Would love to chat with @0xDigitalOil (already DMed in twitter) to work on this together.

Happy to provide an updated funding proposal after discussing with @0xDigitalOil and would like to organize a trusted setup in Nouns community to make the zkVote fully decentralized.

I can see the value in private voting to a point, but I don’t think it would be good for the ecosystem in the long run. Votes being public creates for a lot of awkward moments and hard conversations, but we’re seeing people just now beginning to learn how to challenge each other and keep it civil. Cultivating this virtue is essential to the DAO in my opinion. To do anything to make that more avoidable is a negative in my eyes.

I also don’t think private voting would avoid quid pro quo voting, I just think it would keep it hidden and make the problem worse after a short period of adjustment in the beginning. Worse still, any allegations of collusion would then be unprovable forever rather than being open to inspection. Once that trust barrier breaks down, it would be very difficult to recover without returning to public voting.

Thanks for this @xerophyte.

For the record, responded to your message on twitter and we have a meeting set.

Thanks for your response.

I would counter with:

Private voting is as close as you can get to ensuring that social voting doesn’t occur. If Nouners try to circumvent behind closed doors, I estimate it would be a minority of Nouners in a minority of cases, as it won’t be easy and in most cases impossible to determine if the other party kept their end of the deal. The minority of cases where you could “determine” if the other party kept to their promise, would be edge-case voting outcomes like unanimous votes where you know for certain how every voter voted, or votes where the number of ‘for’ or ‘against’ votes is exactly equal to the number of votes under the control of a particular Nouner or delegate.

In contrast, what we have now is a situation where nearly every Nouner is undoubtedly under pressure at voting time; whereas private voting allows for voting freely and true to one’s beliefs, as it should be.

In summary, and to your first point, I think it is a worthy virtue for the DAO to figure out healthy social voting, but it hasn’t been solved yet, there is no guarantee that it will be, or that if it is that it will withstand the passage of time. For this reason, I rather go with a solution that is much more likely to solve the problem at hand.

Feel free to counter again, as the premise/necessity for this prop is as important as the innovation itself.

In addition, the possibilities for collusion are very limited due to the high cap of Nouns collection

Much needed and something we’ve talked about a ton at House of Nouns. Big ups on this prop idea.

I am not an governance expert, but having privacy voting at least as an option is a very good thing in my view.

Yes, I agree that once we understand more deeply what is possible with private voting for Nouns DAO, we need to have a conversation regarding if we want every single vote to be 100% private, hybrid, or have the option for votes to be completely open or completely private.