On behalf of our team-- I want to formally introduce the Nouns Press Corps (“NPC”), a small volunteer pod of professional communicators focusing on amplifying all the good works tied to Nouns. Our goal is to advocate for Nouns and Nounish projects in traditional print and online press.

Many in professional media (journalists, editors, reporters, and others) are new to web3, NFTs, and decentralization, some are intimately familiar. Therefore a structured onboarding is required to introduce Nouns to them, on their terms.

NPC was founded on the need to build an organic and organized communications strategy that encompassed press, marketing, network building, and more. A small team of us formed and this week we launched our MVP…

The What… We currently offer six defined services:

Over the next month to six weeks, our intended deliverables are:

Easy Actions YOU CAN TAKE TODAY, to help!

As mentioned above, we are a team of professionals volunteering our time to build and execute the above services & deliverables. We plan to show the community our hard work and what we can contribute when properly formed, organized, and executed.

Please Note - we did apply for a small runway of 2ETH in Round 9 of Prop House (Prop 1222) that ends Tuesday, Sept. 6th. If we win, we will use the ETH to cover any expenses (domain reg, mailing list software, etc) and what’s left as small stipends to pay the team for the work they’ve already started and are continuing to do. Regardless, of Prop House passage, we all believe in the mission and will continue to devote our spare time to the NPC and it’s mission.

“Nothing worthwhile was ever accomplished without the will to start, the enthusiasm to continue and, regardless of temporary obstacles, the persistence to complete” - Waite Phillips (American Philanthropist and Businessman)

Build all September. Hustle hard and spread the good word about Nouns. Show our value. Then after we reach our deliverables compile a report and present it (including metrics, findings, and suggestions). With that future knowledge, insight, and context, if appropriate, we may seek funding for an extension, yet with a proper budget (likely through NSFW or another Prop House round) as we intend to be thrifty and strategic.

Hi, I’m Rekola, my background is over 10 years of experience managing press and building proper press infrastructure as I’m a former comms director of multi-national groups including Non-profits, Congressional Leadership, News Organizations, and more. I’ve also been a national spokesman with on-the-record experience on tv and in print. Lastly, I host media training for all kinds of professionals.

BaguHanto is a Developer and Nounish Builder whose focus in NPC to build our web presence, systems, and designs. Bagu will also contribute to the operations, strategic planning, and execution sprints of NPC.
.
.
.
Here is a sample of our Nouns in the New - Round-up:

Substack Link: Week 35: Nouns in the News - Round Up

Links, for you to read…

Here’s a quick round-up of the Nouns Press Corps work metrics for Week 35: (August 28 to September 3, 2022). Our focus, at this point, is the written word, whether in print or online. 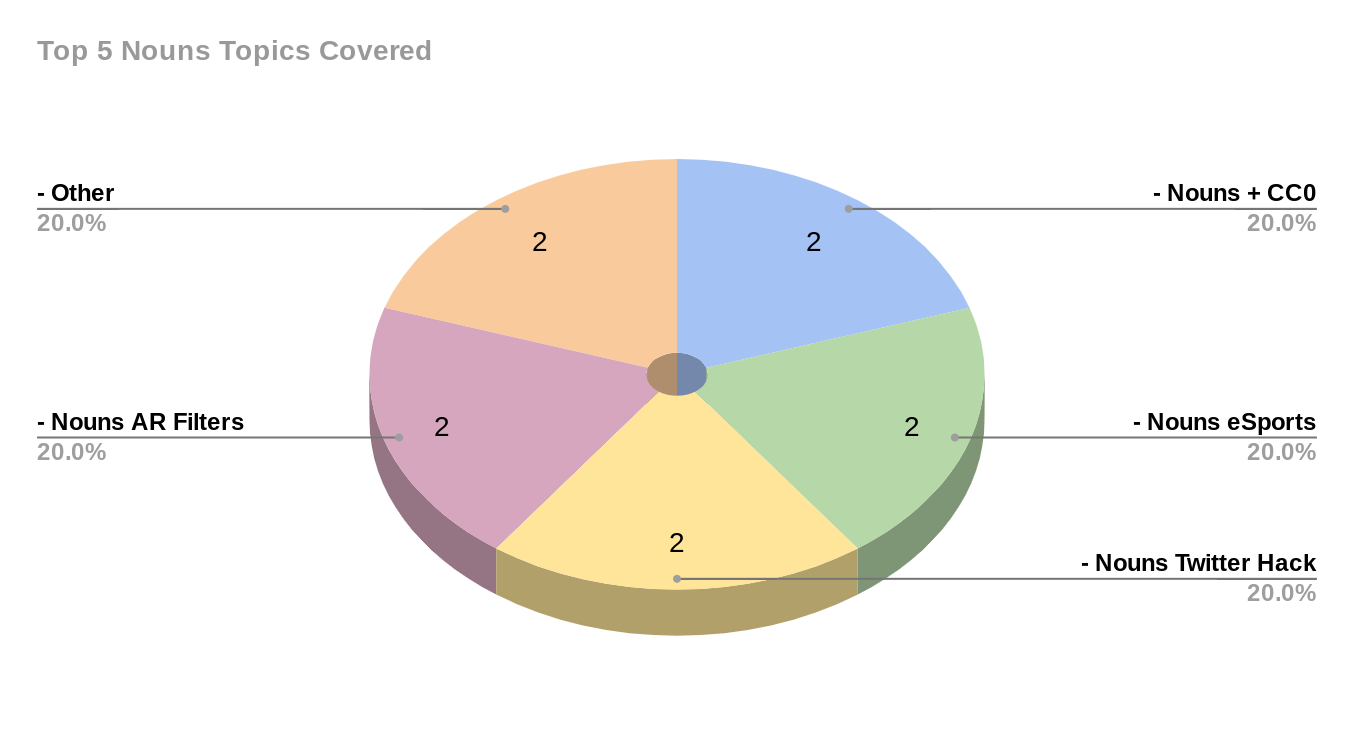 Third, “Nouns Press Corps Impressions” - between our Twitter handle (1,085 impressions) and our Nouns in the News Substack (160 impressions), we reached a total of one thousand and forty-five (1,245) impressions, this week, across those specific channels.

If you made it this far, thanks for reading!

See you all next Sunday.

Substack Link: Week 36: Nouns in the News - Round Up - by Rekola

Links, for you to read…

First, we pitched these three journalists directly, and although they did not write exclusively on Nouns, they did work us into their articles this week. These are our first three Earned Media articles! 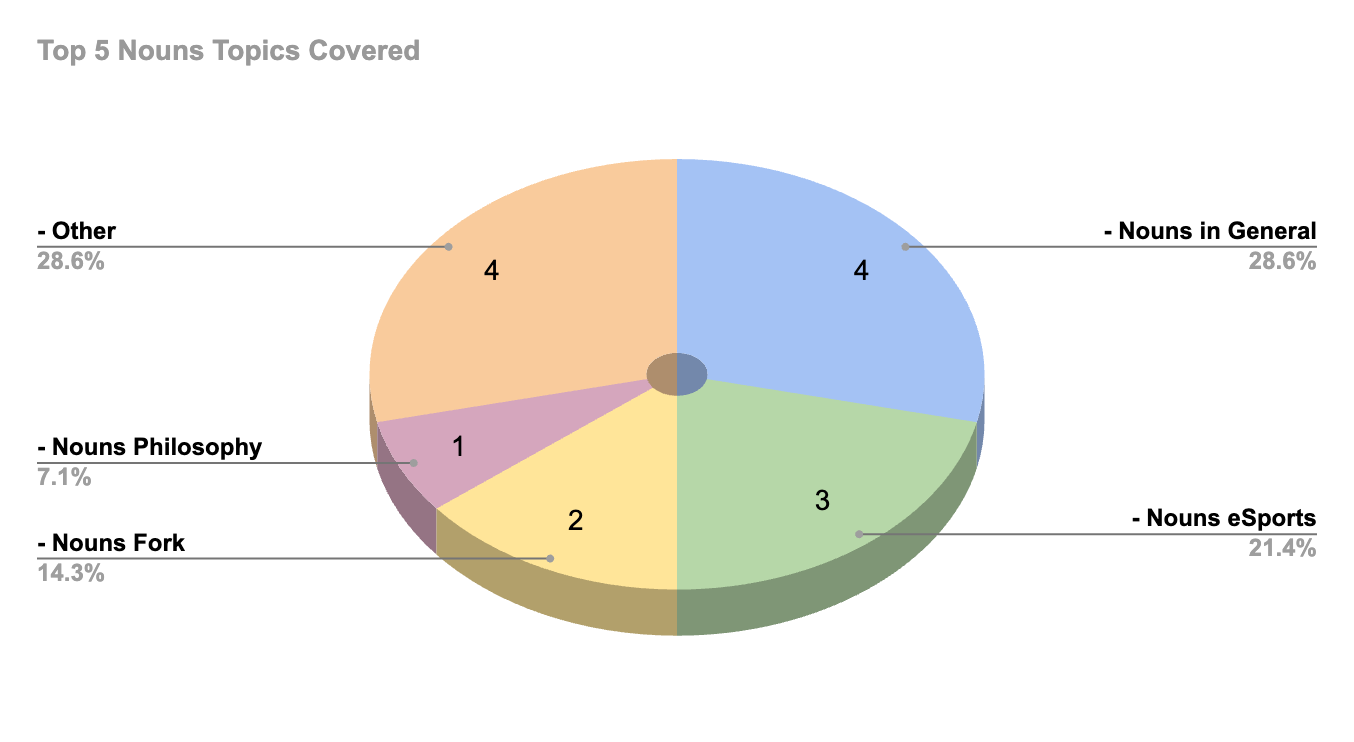 First, “Earned Media” - there were fourteen (14) articles published online that cited Nouns. With three of those articles resulted from direct communications with those journalists The top 5 Noun topics covered were: Nouns in General, Nouns Esports, Nouns’ Forks, and Nouns Philosophy, among others.

Third, “Nouns Press Corps Impressions” - between our Twitter handle (807 impressions) and our Nouns in the News Substack (170 impressions), we reached a total of 977 impressions, this week, across those channels.

See you all next Sunday!

TL/DR - The Nouns Press Corps has reviewed all press metrics from 8/8/2021 (launch date) until today. With this context we will be adjusting our metrics accordingly to measure: Available Press Audience, Estimated Number of Article Views, Number of Article Engagements on Social Media, as well as Average Domain Authority Score.

Here are some quick callouts:

We’ll be back this weekend with our regularly scheduled updates and some of these new graphs!

Summary:
In February 2022, only six months after the launch of Nouns, the community approved Proposal 33, which exchanged a noun for the opportunity to be in a Super Bowl commercial with a prominent beverage company. At the time, the community was blind to the brand, which ultimately was Bud Light. This opportunity yielded with momentary capturing of attention that lead to some “earned media” and greater engagement rates but not a sizeable increase in unique visitor rates to nouns.wtf.

Objective:
The simple objective was to have a “break-through” moment with mainstream culture, thus proliferating the meme.

Strategy:
There were no real measurable metrics tied to the proposal, as the DAO simply provided the Noun, and nothing more.

Effectiveness:
Using the Barcelona Principles (3.0) passed in 2020 by the PR Industry. The Principles measure the efficiency of PR campaigns and reflect a holistic approach that standardizes measurement across all channels, with an eye toward allowing choice in where to invest in public relations and communications to drive optimal organizational performance. As such, we measured the following key performance indicators:

Note - As we we’re not part of the community at the time, we may or may not have all the facts. Above is information distilled from talking to community members. We intend this mini-case study as a positive impact tool.

We’ll be back this weekend with our regularly scheduled updates and some of new graphs!

It’s Week 37, Looks like the Merge suffocated all the press this week. Here are some quick call outs for the week.

A few links, for you to read…

If you made it this far, thanks for reading!

See you all next Sunday. 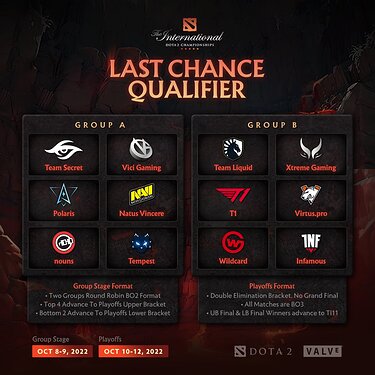 Nouns Esports kicked ass earning 19% of all Nouns’ press coverage over the past 13 months. This is despite only operating for five months. That’s a successful proliferation of the meme vs effort. 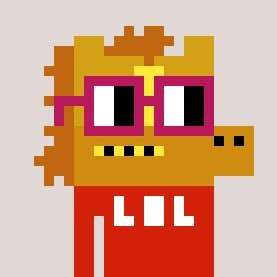 @punk4156
jokes aside, e-sports has been one of the highest ROI proposals (in terms of attention generated) thus far, a vertical nounders didn't ever consider pursuing. imo the success of nouns e-sports clearly demonstrates the power of handing the reigns to the community twitter.com/punk4156/statu…

Why it matters: “Earned Media”, is the hardest media to capture as its’ any material written about the Nouns organization, that Nouns hasn’t paid for directly or created internally. This type of media is always published by a third party and is usually earned through time and networking.

The Nouns Esports Pod has consistently earned press in niche gaming outlets that have penetrated through to gamers– creating a positive immersion of Nouns in new audiences.

The details– in under 5 months of operation the Nouns Esports Pod has:

Nouns Esports and NPC are in discussions towards a collaborative press effort to maximize current trends.

The Nouns Press Corps follows the Barcelona Principles (3.0) passed in 2020 by the PR Industry. The Principles measure the efficiency of PR campaigns and reflect a holistic approach that standardizes measurement across all channels, with an eye toward allowing choice in where to invest in public relations and communications to drive optimal organizational performance. As such, these are the current key performance indicators:

We’ll be back this weekend with our regularly scheduled updates and some of new graphs!

I love what you’re doing! Huge fan of all your initiatives and how informative you are. Keep up the good work and I’m very supportive of all your efforts. Data and tracking information such as this is very necessary for our ecosystem!

Thanks Emma! Appreciate it!

[NPC Update] - EXCITE, ENGAGE, AND ONBOARD…

Key coverage from niche outlets, like Decrypt, penetrates down to their audience generating greater engagement and curiosity towards Nouns than traditional press coverage.

Why it matters: Working with outlets to “earn media” means that Nouns’ must rely on those journalists to convey proper excitement and understanding. As such, mainstream media requires hand holding that takes time, whereas niche web3 journalists understand and grasp our vibes immediately. Thus, their readers get excited, then engaged, then onboarded to Nouns through nouns.wtf.

“Solana co-founder Anatoly Yakovenko tells Decrypt that he believes a major, long-lasting franchise IP could come out of the current NFT space….

‘On the other hand, a project like Nouns uses a “no rights reserved” or open-source approach in which anyone—even people who don’t own the pricey NFTs—can use, modify, and sell any of its imagery.

‘If Yakovenko’s prediction proves to be correct, it’ll be interesting to see what kind of approach wins out: one in which holders (or the general public) can do whatever they want to proliferate the IP, or one in which the original creators remain in charge of the project…”

Metrics - We follow the Barcelona Principles (3.0) passed in 2020 by the PR Industry. The Principles measure the efficiency of PR campaigns and reflect a holistic approach that standardizes measurement across all channels, with an eye toward allowing choice in where to invest in public relations and communications to drive optimal organizational performance. As such, we ask to be measured on the following key performance indicators:

See you next Sunday!

[NPC Update] - MAKING AN EXAMPLE OF…

Nouns continue to hang around the conversations of web3 press. But without direction and guidance Nouns’ mentions remain superficial.

Nouns should be in and around the conversation of many web3 and NFT projects. Yet, we need to encourage the press when mentioning us to (A) backlink to nouns.wtf as a destination for readers, and more importantly (B) dive deeper into our culture. Thus spiking readers’ curiosities to learn more, and click that link!

"Projects in this category include Avastars, CryptoPunks, and Nouns DAO. These types of NFTs don’t need to be backed up since their metadata, including their art, will always be directly retrievable from Ethereum.” - Bankless

Only a service reference. No backlink.

“The author gives up all copyright and no one has ownership. It can be freely copied, modified, distributed and exhibited, even for direct commercial purposes, such as Mfers, Cryptoadz and Nouns.” - CoinSpeaker

Again, only a service reference. No backlink either. We’re in the conversation, superficially.

Metrics - We follow the Barcelona Principles (3.0) passed in 2020 by the PR Industry. The Principles measure the efficiency of PR campaigns and reflect a holistic approach that standardizes measurement across all channels, with an eye toward allowing choice in where to invest in public relations and communications to drive optimal organizational performance. As such, we ask to be measured on the following key performance indicators:

[Screen Shot 2022-10-05 at 12.08.32 PM] ROI, DAO OF THE YEAR & NOUNS PRESS CORPS. Word Count: 854 | Read time: 3 minutes Nouns Press Corps’ work is already creating a 430% return on investment and earning press by providing journalists’ with what they need, as well as an entry / point of contact for Nouns. No to mention partnering with props like Nouns Esports, Nouns Comics, OTG, Nounish Videos, Stoopid Buddy, and more. Why it matters: The average monthly number of articles published coveri…