Bootstrapped by SharkDAO, creator contests are a experiment in creating incentive systems for community creatives via retroactive rewards. The platform allows DAO leaders to run contests in which community members can create submissions in response to prompts and vote on their favorites. At the end of a contest, votes are tallied and rewards are disbursed to winning submitters and voters. We just launched and started running our first contests. You can find them here: creator contests 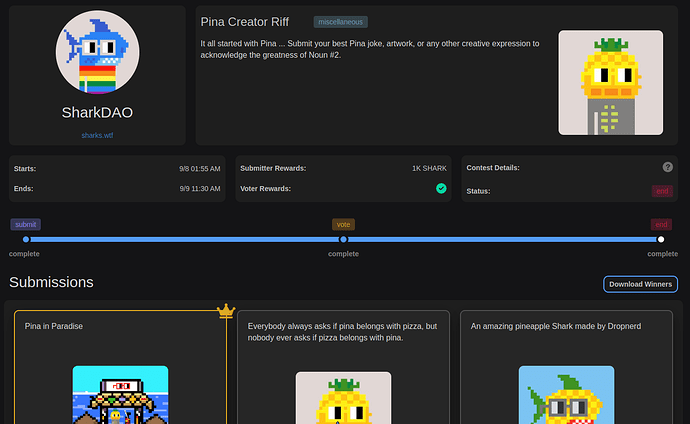 For SharkDAO, we hope that Creator Contests will be a tool to increase collaboration, foster creativity, assist in curation, and help with onboarding. Depending on the setup, contests can be run in open rounds that allow prospective members to earn membership via proof of work. For Nouns, we see contests being a useful application for twitter spaces contests, community engagement, and onboarding. We believe that contest submissions will act as a jumping off point for new ideas and proposals in Nouns & SharkDAO.

Flexible parameters allow contest creators to experiment with unique community incentive systems. Here are a few of the custom params that we support:

How will the funds be used?
We will use the funds to market, further develop, and begin to scale creator contests as an ethereum public good. A large portion will go towards developing the smart contracts required to truly scale contests. This involves development work and costs for getting audited by trusted organizations.

How is this different from Prop House?
While Prop House is a tool to award grants on a ranging scale to Nounish builders and creators, Creator Contests are not quite as serious. Rather than funding early / pre-idea stage ideas with grants, we are focused more on awarding small sum retroactive rewards to community creatives for much smaller contributions. Said in a different way, we hope that submissions surfaced from Creator Contests can snowball and develop into proposals which make their way onto Prop House and Nouns. At SharkDAO, we will use both creator contests and prop house.

Hey, Nick…it’s kind of an interesting idea. I appreciate the initiative to gather creatives and foster collaboration. I would guess a popular response would be that it’s not clear that this is really necessary and would do much to proliferate Nouns. I’m not saying it couldn’t but how it reads, nothing really stands out for anything that would resemble a “hell yes.” I get your kind of “pre-prop house” thinking but not sure that’s going to really energize anybody for the idea.

I think if you wanted to develop the idea, you could paint a picture of 1 or 2 killer use cases that you imagine and describe them for people to try to take a hold of. When reading the prop, it’s all kind of vague to me–nothing I can grab hold of or would want to share with someone else. What do you want us to take from this and be excited to tell someone else about? It’s not clear to me.

Another suggestion, the wording of the prop is kind of thick and not real concrete. Like the opening paragraph for example. Lots of words but they aren’t concrete words or ideas. I would try to be more direct and clear with what this is about. What’s the problem it’s solving, what are the killer use cases, why do we need this. Opening sentences should pop that I say, hmmm that’s cool, I wonder what _______ would think of that. This doesn’t really do that for me.

Hope that helps. There may be something there, but the prop currently isn’t showcasing it yet.

I was just poking around SharkDAO a few days ago and saw this! I thought was cool and it looked brand new. I guess I was right! I like the idea and it I have a couple comments and a question.

As far as prop house, I think they are getting ready to experiment with voting on retro things instead of just funding future props. This app feels much more ready made for that task though, so I’m really interested to see what PH v2 looks like when it’s revealed in the coming days.

This also looks a lot more feature rich. Am I reading it correctly that submitters can be rewarded just for submitting? Like you guys give shark tokens for participation or an NFT could be awarded for a given round for each submission? Does the info go into a database so that you can track who has participated most over a period of time? That could be so powerful for a DAO to help reward the community in unique ways.

One selfish question to finish. Do you have any way to limit the voting based on traits in an NFT or to weight votes based on traits? I’m interested in a clean solution for that for another project that I’m a part of and I’d love to be a guinea pig for your platform if we can figure that out.

I love that you just built this for yourselves initially. Feels very nounish.

… submitters can be rewarded just for submitting?

Yes. The general idea is that as a platform, it is un-opinionated about how contests should be run. We just offer lots of different knobs that allow the contest creators to configure as they wish, so you could do something like this if you want.

At the moment no, but this is a good idea. We can explore ways we can make this happen

Thanks for your feedback!

Wanted to share a couple of use cases + a demo video.

From a curation standpoint, it makes a lot of sense for us to use something like this to gather contributions around a particular area of interest for the DAO. For example, if we are interested in new concepts for our comic series, we can run a contest in which participants can write the next page of the comic. From there, we can curate the best submissions and actually bring them onboard to bring their new ideas to life.

There are cool uses too for newly funded props as well. I.e. if the Nouns esports prop just passed and they need a logo, they could run a contest to open-source the creation of one!

The Nouns Square team could run super quick contests during the call that allows them to automate a lot of the giveaways they already do.

Contests can also be used as a simple way to engage the community and put a spotlight on artists and other creatives.

There are many cool use cases, many of which we haven’t even thought of yet. At SharkDAO, we are excited to experiment with this and see what we can come up with.

Hi Brad, I included some example use cases in my post above

Nice work. Love the idea! Thanks for the video really helped understand the format. Brad has some great points. Is it possible to edit the initial post?

if you can think of a cool first use case of this to help us understand what it could be used for, i would fund it with 1 ETH from NSFW as a trial

Hey 22, we just started a contest today which coincides with the Shark Street Comic release in order to open source the creative direction of Noun 33 (frogger) in future comic chapters. You can find that here frogger contest. This should be an interesting case study.

For more Nouns specific use cases, we are working to set up a nounish gaming art contest with sasquatch and the Nouns esports team in order to source gaming style heads / nouns characters. More to come on this one.

Update: We just wrapped the Froger (noun 33) comic contest. In my opinion, it was a huge success. We saw a great turnout and high quality submissions that will serve as a great pool of ideas / artwork for the Shark Street Comic team to curate from.

Next up, we’re planning on experimenting with contests during TNS broadcasts. We think that integrating creator contests will be a fun & exciting introduction to the larger Nounish community.

To make this work, we’ll be adding twitter integration to the creator contests app for TNS. 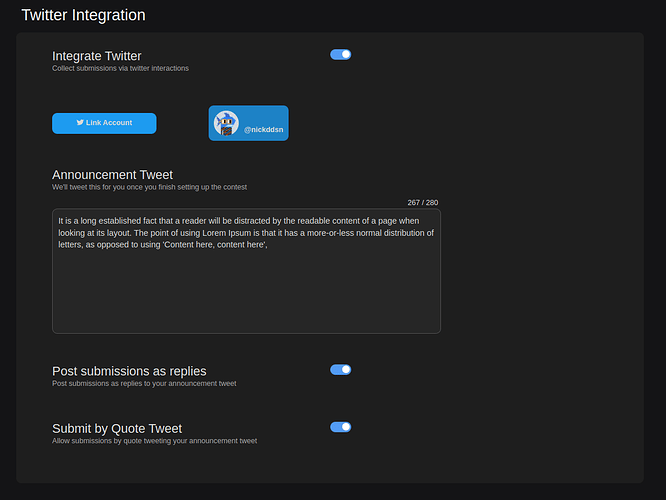 Voting
Participants can cast votes on submissions by interacting with the submission on twitter or via the contest interface.

As a result of this, TNS will be able to take advantage of all contest features and run fully configurable contests during their broadcasts without sacrificing on their twitter engagement goals (if it was all in-app). Gone are the days of tracking down wallet addresses from twitter users.

Once we have this, there are additional use cases for Nouncil, i.e. twitter governance / prop voting.

This sounds really fun! This is the kind of stuff we need for Nouns as this community continues to grow.

Our execution plan is the following…

The initial integration will take 2-3 weeks in total, but we plan to continue supporting / upgrading the code afterwards. For the sake of this proposal, we’ll define this as a 2 month engagement.

We are requesting 8 ETH to design and develop the twitter integration, roughly following the execution plan above. Our team consists of myself and 1 other person. With a burn rate of about 5k per month, 8 ETH will allow us to cover our development expenses as well as compensate some other contributors during the 2 month period.

this is a cool idea, will the code be open source / anything to encourage users to feel safe connecting their twitter?

is there plans to support/display media beyond static images? if there is contest for .gifs , or a music contest (.mp3) or a 1 minute video contest (.mp4) ect

awesome - after getting some feedback from the TNS team, it sounds like this tool would be hugely helpful for the contests we run every week. we will fund this - please keep us posted on the progress

dope, looking forward to seeing the team continue to build on this