Explore a Nounish VR World made by Imaginouns, “Ready Player Noun”, with Nounish Mini-Games, VR Noggles, Edutainment Experiences, NFTs and free to anyone with an eligible VR headset inside Meta Horizon Worlds.

Ready Player Noun brings value to the Nouns not only through further brand proliferation, but by also offering a unique virtual technological asset that has not been seen yet within the NounsDAO ecosystem. NounsDAO members, builders and anyone with a Quest 2 VR headset (Rift can access with Air Link), can enter the Ready Player Noun VR world, bringing Nouns to Meta and Horizon Worlds.

Horizon Worlds is a Massively Multiplayer Online experience hub and was released in the U.S and Canada December 9, 2021.

As of June, 2022 the IDC(International Data Corporation) most recent approximation is 25 million Quest 2 users alone.

This is more headsets/users than any other VR Brand combined.

For reference, Sony introduced online multiplayer to the PlayStation 2 in 2000 and currently has an approx. 109 Million players.

So those that win NFT’s within Ready Player Noun will be able to show off their NFT’s from the OpenSea Collection on Instagram and Meta(formerly known as Facebook)!

Imaginouns is excited to simultaneously launch VR Noggles. As you explore the Ready Player Noun world, these Nouns glasses are grabbable and wearable. Maybe you’ll find a pair at the top of the map like the coveted Goldenly Nounish Noggles OR you could steal the classic red Noggles from a sleepy astronaut.

Remember to take some sweet selfies wearing your Nouns glasses- a.k.a Noggles- when you do so you can show off your Avatar’s newly found Nounish steezy. You’ll have to use some skills to stay on the Nounish space ship all the way up to the clouds OR you can take the easier route and hop on the flying Noggles wearing Burger! 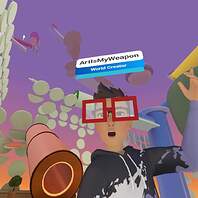 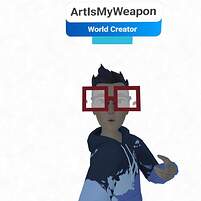 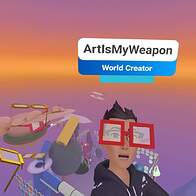 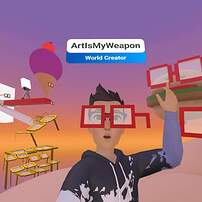 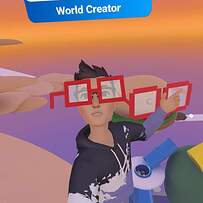 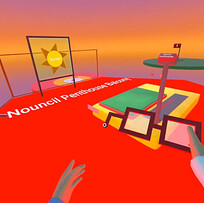 The Ready Player Noun VR World offers proliferation of the Nouns community in an environment that is new, exciting and still in the early days of exploration. Imaginouns seeks to continue to offer various Nounish AR projects and 3D assets as well as art classes to the community, but is ready to begin capitalizing on the potential of VR.

This inaugural Nounish VR world is in Beta and will continue to be given additions, optimizations and maintenance. There are near daily updates for Horizon World’s Creators, so the scripting/coding capabilities are getting more exciting by the day. As Ready Player Noun is live, I will be constructing a 2nd Nounish World of a different genre/theme of experience altogether in order to be ready for next month’s new world.(A Noun O’Clock VR HQ/Comedy Club/Bowling Alley/Skate Park/ Art Studio e.g)

I have been buidling and will continue to build a bank, or toolkit, of Nounish VR Assets, which are able to be used by all. This library of Nounish Horizon Worlds assets will allow new buidlers to quickly Nounify the World’s they create.

As I am building multiple worlds, there will be a wide variety of different genres and styles of usable and wearable assets available.

Provided with the Nounish VR Builder Video/Tutorials I will put out, creating will be a blast!

Ready Player Noun is the first of many Nounish VR worlds and experiences to come(I’m currently creating partitions for the FOODNOUNS VR Test Kitchen!). Each new Nounish VR world created can be connected to each other through “portals”, allowing for easy proliferation amongst various Nounish VR environments. 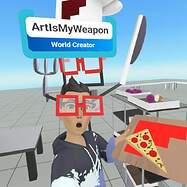 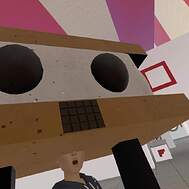 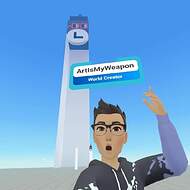 As a special bonus and as a way to bridge the NFT/web3 and VR/web2 worlds, anyone who takes a selfie in Ready Player Noun for the first 3 months after launch while wearing any of the VR Nouns Noggles will receive a commemorative Nounish NFT depending on which color pair they take a selfie with. This NFT will come from the Ready Player Noun OpenSea Collection. NFT’s limited to one per account. I plan on doing POAP event’s within Ready Player Noun as well, as I believe Gamification of everything is a fantastic path to garnering participation and onboarding the masses.

In addition, I would also like to buy Meta Quest Devices!

I will use the remaining funds as direct Ξ prize(s).

The Meta Quest 2 giveaways would allow brand new users of VR technology to have a truly immersive and fantastically Nounish Virtual Reality Experience with Ready Player Noun as their first of many virtual adventures to come.

Important items to note regarding Imaginouns involvement with this proliferation project:

Since the successful implementation of the Imaginouns Art AR/VR Classes, the next clear step was to bring the next stage of evolution of Imaginouns to Nouns Strategic Funding Works. I can’t wait to see what bright, beautiful virtual Nounish worlds await us in the near-future. I would LOVE to hear what Nounish Worlds and Mini-Games you’d like to see in the Nouns and Ready Player Noun ecosystem. Imaginouns looks forward to continuing buidling and proliferating!

I’m not very VR savvy, but I’ve really enjoyed your videos and I can see the potential here for sure. Regarding your TLDR:

Explore a Nounish VR World made by Imaginouns, “Ready Player Noun”, with Nounish Mini-Games, VR Noggles, Edutainment Experiences, NFTs and free to anyone with an eligible VR headset inside Meta Horizon Worlds.

Could you explain to a layman what ‘Nounish Mini-Games and Edutainment Experiences’ might look like? I’m trying to grasp how VR will go from gimmick to full fledged game and practical tool and those statements peaked my interest.

Thank you for your kind words Andrew! I’m glad you’ve enjoyed the Ready Player Noun Content. It is just getting started

Mini-Games are and have been Trending this year in web2 and web3 gaming. This gives Ready Player Noun the ability to create custom individual, yet interconnected, Worlds catering to as many individuals as possible. Most everyone will be in VR/AR at some point but not everyone will want to ride a rollercoaster. Historically the most significant applications of VR have been in medicine, education, R&D and so the ability to educate in VR has always been paramount to the purpose of this tech.
As I am firstly a Teacher, secondly an Artist and thirdly an Entertainer; VR provides myself and Nouns an incredible vessel to provide all of these in one World or individually.
An example of a Nounish VR Mini-Game within the Ready Player Noun Metaverse could be something as simple as Lazer Tag, Mini Golf, Capture The Flag,
Puzzle Games(search for hidden items to complete an achievement, unlock hidden doors or chests and win a prize), Races all while wearing Noggles in VR…
Currently in RPN there are two paths to two different pairs of wearable Noggles.
One is easy and one is difficult.
Take a selfie wearing the Goldenly Nounish Noggles and earn an NFT. That’s one game!
For most, starting out in VR a simple jumping puzzle game like this is a perfect entry-point which is not too intimidating.
As a Creator, new tools are provided to us weekly so these possibilities are always growing.
As I am Art Is My Weapon there will be an Imaginouns World for painting where we can imagine and paint Nouns together.
In the FOODNOUNS VR Test Kitchen we can learn culinary techniques, recipes, hang out in the garden/permaculture section, head into the Walk-In and learn about proper storage, there’s a Nounish grill with temp that is animated and able to interact and “cook” food.
We can have Keynotes/presentations within any of these worlds as I have put a stage of some kind in all World’s.
Also for Mental Health/Neurodiverse group’s there will be a Nounish World as well.
Of course The Noun Square Tower is under construction and will be able to Stream live in our Nounish Avatars and Noggles to the world directly from Meta throughout the Metaverse.
Also (Tiny Dino game where I put a Noggle-wearing Tiny Dino inside an egg and you have to find the egg and crack it open to reveal the Tiny Dino)
(Shark DAO Shark Week World where we swim with friendly Nouns sharks, collect stuff and learn that sharks can be frens too!?)
Please ask any further questions as I love answering them!

Doing this in Horizon world is a bad idea in my honest opinion. Also I dont understand the need that DAO fund VR headset that would be your personal property in future. Currently these things are not accessible to a wider audience and will be barely used by even 10 people once fully developed.
Maybe try an open world which is accessible to more people without much hardware requirements that are also expensive; VR Chat for example where people can explore the metaverse without VR headset as well and interact with people if a collective event takes place.

Scope of this one seems really big! Like a long road, but a potentially really good one! I’ve only used a VR headset once for a couple minutes so I am very not familiar with the whole genre but, I do know a place where there is some very pertinent (and moving) educational content on building virtual worlds. It’s a game I have followed that’s been in development publicly for a long time. All of their marketing content is behind the scenes nuts and bolts about how they’re building their (very compelling!) virtual world, it’s called Pantheon. So much building content on their youtube. I know there are some gems for you in that content, because I feel they are majorly pioneering the essence of VR worlds, or at least their version of it, even though it’s maybe not technically a vr game. It’s basically by the creator of everquest, the first mmo, the first huge successful digital world. And they’ve been building in public for years because it’s crowd funded. So much to enjoyably learn there for free!

Other thoughts:
The content value and track seems great and ripe with educational/engaging/enjoyable potential! How will the project bring people into the Nounish VR world (to nouns et al)? How is the VR world project reaching that person with a VR headset who’s never heard about nouns? How are you delivering nouns VR teasers to that person? How are they then getting on boarded into the nounish vr world to the cool content you’re putting together? Seems to me like you’ve got content and content production ability! Salute!