Produce temporary tattoos for proliferators to use and distribute at events.

WHY?
I believe that Temporary Tattoos would be a great way of proliferation for the Nounish community, being distributed at events for adults and children to use, arousing people’s curiosity as well as being very fun!

HOW?
I bet you have already wanted to make a tattoo of a noggles but in the end, you always lost the courage, right? And what if I tell you it’s possible and all you need is a little bit of water? 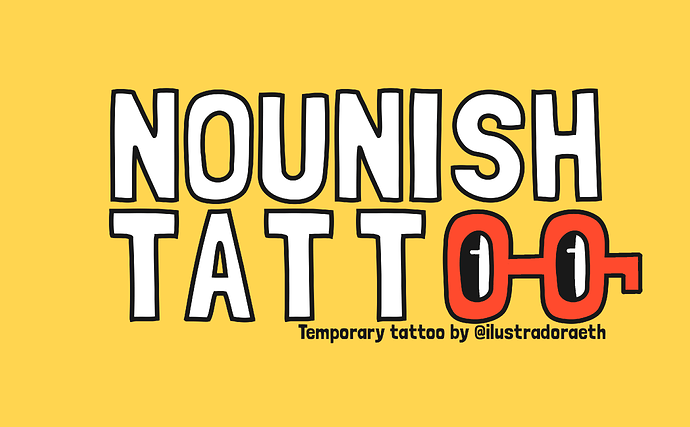 Temporary tattoos are a solution for those who still don’t want to do something definitive on their body. It will be a fun way to propagate the image of the Nounish community at crypto events like NFT NYC, but also in non-crypto events like the Carnival of Brazil.

It can be used by adults and children, anywhere on the skin by adding just a little bit of water and to be removed, just use a little bit of hand sanitizer. The duration will depend on how the tattoo is taken care of, but on average its duration is up to 3 days. We can make a temporary tattoo with any design and text, and also with any color and shape.

I intend to produce 2,000 units of temporary tattoos, distribute them to some communities of the nouns ecosystem for propagation at events such as: Nouns in Rio, NounsBR, Mucho Love, Nouns On The Ground OTG, Gnars, Lil Nouns, among others.

And below some examples with some models that I intend to do;

WHO IS ILUSTRADORA?
ilustradora or Dora, for those who prefer, is a Brazilian 2D digital artist whose main art style is Cartoon, focusing on character creation and design. She began in the Nounish community in mid-July 2022, participating in some art contests organized by Nouns in Rio, NounsBR, and The Noun Square. After that, she made various commissions for various members of the community, including Lil Nouns, Gnars, NounsBR, Nouns Name Service, creating PFPs, POAPs, Twitter banners, and making weekly art for the Lil Sisters Fund project since the beginning.

Below are a few examples;
You can follow my Twitter to get to know me better: Dora’s Twitter
In November 2022, her proposal for the production of a Nounish Coloring Book for children was approved in the second round of the Lil Sisters Fund project. 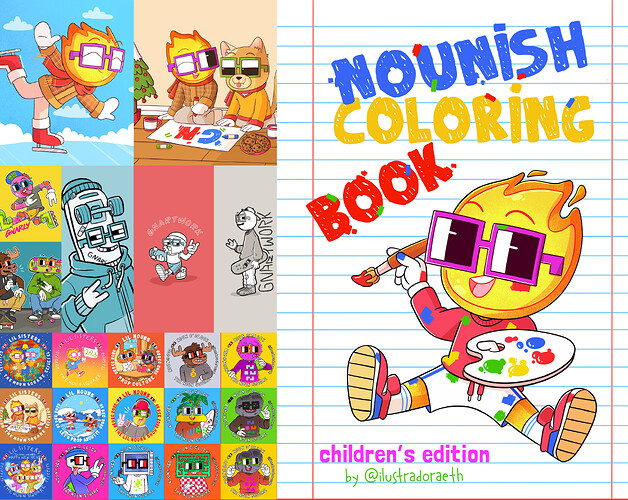 TIME FOR PRODUCTION
1 month after the proposal approval.

ohhhhh. this is wonderful! Noun22 could save a bundle by not having to cover real ones. And… I could change my tattoo whenever I want! I dig this! As we help local groups start up for internatioNouns, these would be great to send out to them for their first IRL events.

If you do this on a platform that would allow others to order them, that would be rad!

Have you received and tested samples?

Yes, you will can change the local of your tattoo always you want, the design too! Amazing idea to send some packs for these local groups!

I don’t have samples to test because the cost to make copies is a bit high for me now (the supplier allows a minimum of 50 copies). But I have some photos of temporary tattoos that stay on the skin, I got them from the supplier own website.

OMG THIS IS AN AMAZING IDEA!!!
And super low budget. To be fair, would love to talk to you and maybe expand the idea a bit.
hmu, please <3

I love this to the moon and back! really great idea

Amazing idea and so fun!! The possibilities of the kinds of quirky nounish tattoo ideas are endless🙌🏾 Love the colours and images in the prop. Easy to read and the ask is reasonable.

Oh wow!! Sure, we can talk about when you want, would be great!

Hey hey Sir!! Thank you, it’s a honor receive your feedback, I really love your work! If the proposal happens I will send to you a pack with some designs!!

Thank you so much for your feedback, Yemi! Would be so cool to distribute these temporary tattoos on IRL events around the world, all the ages would be fun!

if you make a large quantity and package them they can be stored in our warehouse eand shipped with other NOUN things we make, there are logistics costs involved but it will enable people to order lots of different things from one location

Brilliant idea, Sir!! We can talk better in discord about it, what do you think?? I would love to know more, and you have a great experience with logistics and shop!

Thank you for your reply!

can always use more tattoos… would you store them in brazil? i am happy to pay for you to design cool tattoo art, but i want to make sure distribution is handled in the right way. are there sites where the designs can be made to order upon request?

Thank you sir for your questions! Let’s go for parts!

Yes, the tattoos would be stored in Brazil, in this first moment I will send the tattoos (shipping included in budget) to the following communities below:

For this first moment, will be a test, So these communities will have no cost.

After this test, I plan to have a website like a store created so that other members of the communities can place orders with custom designs of their choice for temporary tattoos. The shipping would be from Brazil.

Being able to have partnerships with other stores around the world, like BigShot Klim from USA!

I hope I have answered your questions, I am available to clarify whatever else is needed!

How much are shipping costs? Are they double since we have to send then to BRZ and then you send them somewhere else? Is there a way to do drop-shipping where they are shipped when ordered?

All the Temporary Tattoos will be produced and shipped from Brazil, so the shipping costs will be from Brazil to other countries

It depends a lot on the size and weight of the package, as well as the location it will be sent to. I researched these shipping rates only on the main carrier here in Brazil (Correios) but I believe there are several other companies such as Fedex and UPS

For exemple, A box with 300 units of tattoos shipped from São Paulo Brazil to New York City will cost between $28 and $38 dollars. The cost varies from country to country and also the package size (CORREIOS BRAZIL) With an estimated time of 8 to 12 days.
But the deadlines and prices will depend on which country I am going to send to, a country in the European or Asian continent may be more expensive and take more time 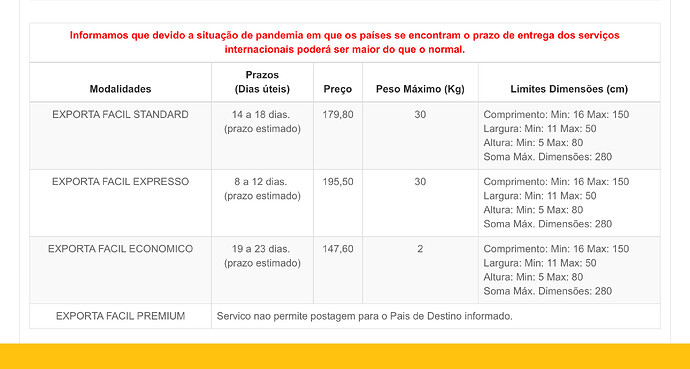 I hope I was able to explain what I wanted!!

NSFW discussed- we would be willing to retro reward you for creating some tattoo designs - but we think it would be better if buyers went directly to the printer themselves and had tattoos shipped directly to them from the printer, which NSFW would also cover

I didn’t understand well sir, when you say printer do you mean the company that will produce the tattoos? I believe they don’t deliver outside of Brazilian territory. I would also need to make the packs with various designs, otherwise the person would only receive one model in large quantity.

got it - i am just saying i don’t know if it makes sense to pay 2 ETH to print a ton of stickers that you will distribute, instead that the art you create can be used by the printer/company that is most convenient for the buyer to use. i believe it is very easy to get temp tattoos made at a variety of different websites, but high quality cool tattoo art is the valuable piece of this. does that make sense?

But that way people would have the cost to make the tattoos in their countries, if I just make the designs with my art the requested value in the proposal should be very decreased!
Because this way there will be no shipping or printing cost, but the printing cost would fall for the community that I mentioned above, is this correct?

NSFW want I just make the designs for the temporary tattoos? Sorry for I’m not understanding so well this part, sir.