I wanted to highlight our patented GBM Bid-to-Earn auction mechanism which could be an awesome way to conduct your daily auctions.

With GBM, whenever a bidder gets outbid, they make money, introducing the concept of Bid-to-Earn.

For the project, GBM has been proven to supercharge both the number of participants and the sales price.

For your community, it turns every auction into a much more rewarding and engaging experience, where you either win the NFT or walk away with more money then you started with- ensuring everybody wins!

We are already battle tested with over 50,000 auctions completed and are also working with SongADAO, where they create and auction a song NFT everyday, so a very similar concept.

Heres our 1 pager doc, which runs through the key points and numbers: 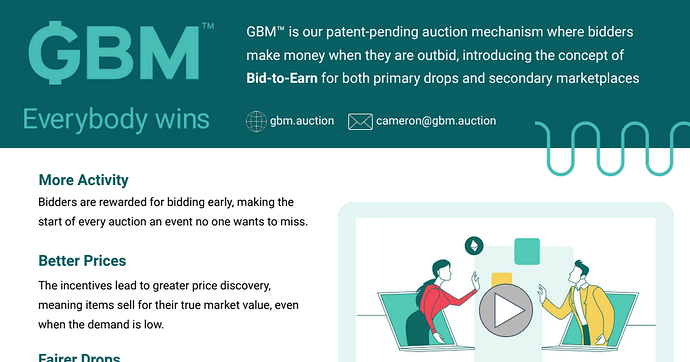 Here’s also a case study we did with one our existing partners, Aavegotchi
https://gbm.auction/case-study

We also ran a large empirical study last year which proved how the GBM auction system has a higher first bid, higher bids overall, a higher selling price, a higher revenue for the seller, fewer bids and takes less time to reach its final bid than an English auction — all other things being equal. You can find it here: 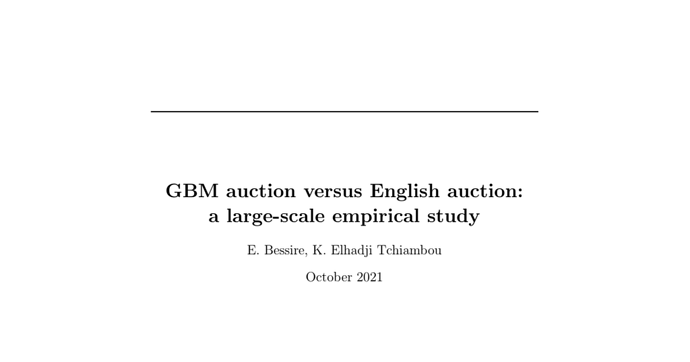 Would love to hear your thoughts!

I think we have some pieces of this now in place. The auction does have minimum steps built in already. Someone with more knowledge on it could probably quote the percentage. There is also an incentive mechanism via a POAP for the top 5 bids.

The part about the reward if you are outbid is sounds cool though. Were you able to implement that with an on-chain auction? I’m not sure if that’s one of the parameters than can be changed in the Nouns contract, but it would be interesting to explore.

Thanks for getting back to me.

Yes all auctions would have minimum steps - the GBM auction is an iteration of the English Auction style you are using already, except it incentivises bidding. It also means the bidding and buzz happens straight away as people pile in to put in a bid they believe will get outbid, while with a traditional english auction most of the action tends to happen at the end. The more bidding action you have earlier in the auction, also then attracts more people in.

Understood on your current incentive mechanism of POAPs for the top 5 bids, at least you have something. With GBM however, all bidders would have received a payout except the winner, as the winner’s reward is the NFT they wanted! I am sure you can also keep the POAP for the top 5 bids with this system too, should you wish.

As the incentive payout happens in real time in whatever currency the auction is listed in e.g. ETH, when bidders recive their incentive, they usually put it back in to bid again or save for the next auction. Ofcourse you can’t do this a POAP reward.

Finally, our smart contracts are specifically designed to work with on-chain auctions. You would simply deploy our smart contracts on the back end and the bidding would be done through those. Sinc you already have an auction front-end, it would be a very simple integration.

Would be happy to give you access to our codebase if you interested in exploring. Would be you be opposed to jumping on a quick call?

I am not the right person to look at the code

, but I think you would do well to talk with the Verbs team. @verb-e and @davidbrai are the two doing a lot of the research around those kinds of things. Maybe @devcarrot or @solimander would be interested to see this as well.